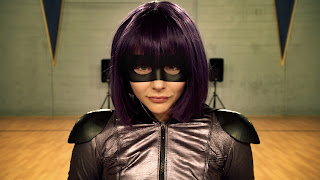 Let’s start off with some basics. Kick-Ass 2 is based on Kick-Ass, which is based on the comics of the same name by Mark Millar. You may remember Millar as the jerk face who said that comics aren’t written for women, thus showing that he knows nothing about his audience (which is statistically forty-five percent female), and that he is a total poophead.

I bring this up not just because I find it important to remember things like this, but also because it kind of sums up Kick-Ass 2 really well. This is a movie for boys who like superheroes. This is not a movie for girls. They couldn’t have been more clear about it if they put up a sign on their treehouse that said “No girls allowed.”

For those of you not in the know, Kick-Ass was a semi-satirical look at the world of superheroes. It followed Dave Lizewski (Aaron Taylor-Johnson), a mild-mannered nerd who got beat up in a mugging and suffered severe nerve damage, giving him a really high pain tolerance. Obviously he used this to fight crime, because why not? 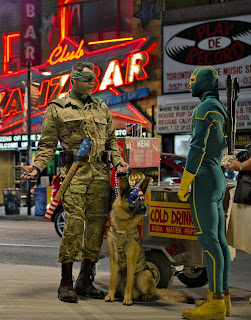 The concept of the series is very simple: what if real people started dressing up like superheroes? It’s a modern, less depressing version of Watchmen, and for the most part, I find it interesting.

Kick-Ass 2 takes up about a year or so after the first one. Everyone knows about the superheroes now, but Dave has hung up the Kick-Ass cape. Hit-Girl, or Mindy Macready as she’s known in real life (Chloë Grace Moretz), is trying to acclimate to normal life now that her father has passed and her new guardian doesn’t want her moonlighting as a vigilante. Lots of other superheroes roam the streets. Chris D’Amico (Christopher Mintz-Plasse) is at a loss for what to do, other than try to get revenge on Kick-Ass for killing his mobster father.

The plot was a bit of a jumbled mess, but the basics are pretty simple. It’s about trying to figure out who you are and what your place is in the world. Is being a superhero who you really are, or is it just something you do? What value should we place on the promises we made to loved ones? And what is the real world anyway?

The movie answers these questions, or at least tries to, and it does manage to be entertaining and interesting along the way. It just also manages to be horrifically and brutally sexist. Because of course it does.

I’m trying to figure out how to sum up the plot, so I think we’ll just go super short on this one. Basically, Kick-Ass joins up with a bunch of new superheroes to fight crime while Hit-Girl tries to figure out how to be a teenage girl. Bad things happen to both of them. Chris D’Amico accidentally murders his mother and decides to be a supervillain called The Motherfucker, because of reasons, I guess, and everyone spends the whole movie talking about how Kick-Ass and Hit-Girl are totally doing it. They aren’t. For the record. 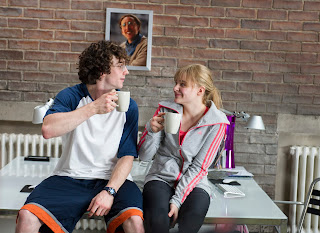 Now that was indeed short, but even there you can see the basic problem with this movie. Kick-Ass’ story was about him learning to be more of a badass and a great fighter and how to make a difference for good while living up to his responsibilities. It’s about him learning to be a hero. And Hit-Girl’s story is about being a teenage girl. Not a teenager, specifically a teenage girl.

The movie gives pretty equal weight to Kick-Ass and Hit-Girl’s stories, which ordinarily I would think is great, but here I kind of hated. Because not only is Kick-Ass’ story objectively better, he’s also always billed as the main guy, even when Hit-Girl is way better at, well, everything than he is.

She’s a better fighter, so she trains him. She’s braver, so she teaches him to conquer his fears. She’s got more gadgets, so she loans them to Kick-Ass. While this behavior would make me thrilled if it were performed by a two year-old, when it’s done by one of the only female characters in a notoriously male dominated story, I get kind of suspicious.

And rightly so. Hit-Girl’s story is about being a girl. It becomes her only defining feature, that and her ability to hurt people. It’s all about her trying to be the perfect little girl for her adoptive father, the grossly underused Morris Chestnut, learning about popularity, and discovering that boys make her feel all tingly inside. 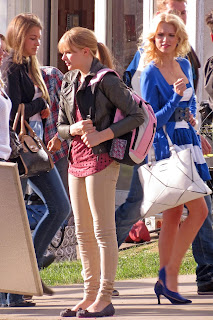 No, seriously, that’s what her storyline is about. She uses her superpowers not to fight crime, but to get onto the Varsity Dance Team.

And I get it. She already was a superhero, so it’s good to see her as a character dealing with the suddenness of normal life, and how that screws with her. Honestly, if all the other female characters in this movie were well-rounded and interesting I probably wouldn’t mind this at all. But they aren’t. And therefore this seems less like a promising character development based on thought and deep understanding of story structure, and more like sexist bullshit.

Because the other female characters in this movie? Totally blow.

On the not actually superheroes side, we have Dave’s girlfriend from the first movie, Katie (Lyndsy Fonseca), who dumps him because she thinks he’s cheating on her with Hit-Girl. To be fair, he kind of is, but the movie makes her out to be a total bitch for doing that, and then writes her out of the story, despite her being one of the only people to know Dave is Kick-Ass.

There’s also Brooke (Claudia Lee), a mean girl stereotype so stereotypical that I’m not convinced I could pick her out of a lineup, and really have to say that the actress should have slowly backed away from this part like it was radioactive. But pretty much, she plays a mean girl who decides to help Hit-Girl, only to find that Hit-Girl is kind of cool, which means that she must be destroyed, and then Brooke is mean and gets her just desserts and booooring. 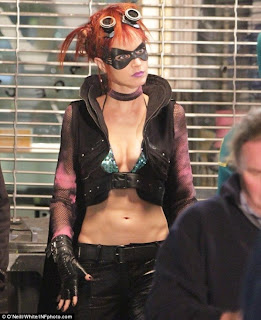 Oh, and Angie D’Amico shows up, only to be savagely murdered by her son in her one and only scene. She does live on throughout the rest of the movie as a really uncomfortable joke (Chris dresses up in her S&M gear to be a supervillain called “The Motherfucker”).

And then there are the superheroes/supervillains.

So, yes, I do understand that some women will decide that being a badass means wearing skimpy clothes and beating people up. I get it. But I don’t really get what else we were supposed to understand about Night Bitch. Because that’s seriously all she does. She has sex with Kick-Ass because she likes fighting crime, but she doesn’t actually care about him. She is literally only there to give him someone to bone while the plot progresses, and then be threatened with rape and beaten into hospitalization when the story is done with her.

Remembering Tommy is a stereotype of little old ladies everywhere, which is sad since she’s only supposed to be in her early forties, and I actually quite liked her character and would have loved to get more information about her.

Finally, Mother Russia, the supervillain whose costume was so awkward it made me feel intensely uncomfortable, and those are the same bits I (ostensibly) have. I just wasn’t ready for so much muscle-y flesh to be flexed all over the big screen. But, again, she’s a character defined by her overwhelming sexual appeal, that’s made funny by her butch haircut and Russian accent. She’s sexy, but scary, because strong women are terrifying but also a little funny, right guys? 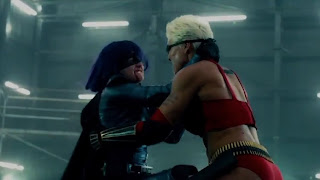 Now, again, any of these characters would have been fine on their own. If there was just one character like this, defined by her sex appeal or lack thereof it, relating only to male characters and storylines, and subject to intense sexualized violence and aggression, I could deal.

But it was literally all of them.

Not only that, but the women spoke to each other and to the men using terms for female anatomy in a derogatory way. Hit-Girl was constantly calling people “little bitches”, which is just baffling since she’s a girl. Shouldn’t she be calling them little dicks or something?

The fighting, the story, the characters, and even the very language in this movie was so incredibly sexist and gendered that I found myself intrigued even as I was repulsed. And that it ended with Hit-Girl giving in to her tingling ladybits and kissing Kick-Ass (without his consent, of course, because getting consent is for little bitches) – I am not amused.

Just generally speaking I think I’m not amused. I enjoyed the movie, like I said above, but that doesn’t excuse its behavior. Just because I liked something doesn’t make it okay. It’s a fun, entertaining movie, but it’s also, well, horrible. 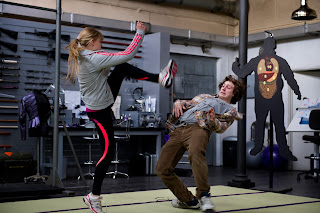 Because the supervillain calls himself The Motherfucker, and there’s a Mother Russia, and Hit-Girl, and Night Bitch, and seriously the names here are gendered as all get out.

Why do all the female superheroes/villains have names that refer specifically to their anatomical status? Why does it matter?


Maybe women don’t buy comics because they don’t like being called bitches all the time. Just saying.