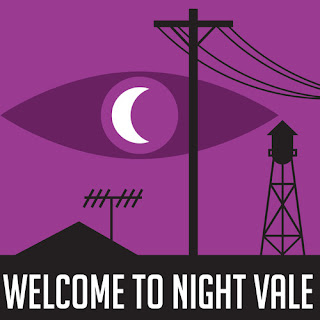 Here are the first two things that come to mind when I think about Welcome to Night Vale: first, I did not know what it was until last week, and second, I am now completely caught up and more than a little obsessed.

Welcome to Night Vale is a podcast done in the style of a classic radio show. It’s reminiscent of Garrison Keillor’s News from Lake Woebegone segment, wherein the narrator relates funny fake news from a funny and quirky fake town.

Except Welcome to Night Vale is a bit more Stephen King and Neil Gaiman than cutesy small town America. Or rather, it’s terrifying existential horror and kistchy Americana. Which seems to be the basis of its appeal.

The show is a simple community news broadcast, read by our default lead, Cecil Baldwin. Cecil is both the name of the actor and the character, which can get a little confusing, but I feel confident that we’ll soldier through. By Cecil’s narration we come to understand the general local goings on in the small desert town of Night Vale. Its new dog park, the latest press release from the City Council, how Old Woman Josie is holding up, and the ongoing sports rivalry (and everything else rivalry) with neighboring burg Desert Bluffs.

Oh, and terrifying eldritch horrors. That too.

The joke of Welcome to Night Vale is that the whole show is just a completely normal radio broadcast that casually mentions horrifying events that would cause most towns to just up and disperse, let alone hunker down and just shrug things off as “Night Vale being Night Vale.”

What do I mean by eldritch horrors? Well, for starters, that new dog park is surrounded by an electrified, black, featureless wall and is only used by mysterious hooded figures that we are repeatedly told not to look at or acknowledge. And Old Woman Josie plays host to angels, even though we are told repeatedly that angels do not exist, and only tell lies. The star quarterback on Night Vale’s football team has two heads. Librarians are terrifying child eating monsters, and a hypnotic glow cloud is president of the school board.

It’s all played for laughs, of course, but the show actually does have its moments of genuine creep. Each episode veers from the hilarious to the insane to the intensely frightening, and then back again. For every funny story about Mayor Winchell reacting badly to news that her opponent in the next election might be a five headed dragon, there’s a really scary bit where the dog park actually opens its gates, or people start turning into trees, or the man with the tan jacket who carries a brief case that contains only flies comes a little too close.

And, of course, there’s Carlos. Carlos, one of the only characters acknowledged as not having originated in Night Vale, appears in the first episode as a scientist come to study this completely bonkers town. The other scientists slowly disappear and/or flee the town, but Carlos stays. Partly because of the science, and partly because of Cecil.

Cecil, who is probably the least subtle person in the history of ever, has a huge crush on Carlos and absolutely no compunctions about sharing it on the air. He loves Carlos’ perfect hair, his perfect jaw, the little patches of grey at his temples, Carlos’ weekend lab coat – everything. It’s honestly pretty hilarious at first, and then it gets rather touching.

Because here’s the thing: the show isn’t about finding answers. It’s really not. I doubt we’ll ever get a concrete resolution on why Night Vale exists, what the bloodstones are for, how the Sheriff’s Secret Police were formed, and what the hell invisible pie is. And that’s fine. I really don’t care.

This show isn’t about the destination, it’s about the journey. Imaginary corn, the destructive power of wheat and wheat-by-products, and the foul “Apache” Tracker (he’s super racist and a total jerk), are all just the means through which the podcast chooses to tell the real story. The real story is about people.

It’s about hearing how Cecil manages at discovering his evil twin. Getting texts from Dana the Intern who managed to get into the dog park and is somehow still alive. Feeling your teeth clench when Carlos gets injured. And feeling genuinely kind of sad when the “Apache” Tracker dies.

To suggest that there is an end goal here is to reduce what this show ultimately is. It’s about people and a town, and the weirdness of life. Yes, their lives are infinitely weirder than ours, but it’s kind of nice to see that. To see people whose lives are verifiably insane just going about their daily business. The kids are missing this week? They’ll be back. All wheat and wheat-by-products have turned into poisonous snakes? I was meaning to go gluten-free.  And so on.

Now, the analytical part of me would like to mention that this show is also a triumph for direct dissemination of product. The show’s creators release it directly from their website and on iTunes, and while the show is free, they haven’t gone in for corporate sponsorship, and instead subsist off of donations and t-shirt sales. In the past couple of months their audience has grown exponentially, and I think we can chalk this one up as another triumph of the internet helping obscure stuff find its audience.


But mostly what I think about Welcome to Night Vale is this: it’s good. Very good. I enjoy it and I look forward to the next episode. No, I don’t know what’s really going on, but that’s okay. I’m happy to be along for the ride.