I Could Relate to No One (Percy Jackson: The Lightning Thief) 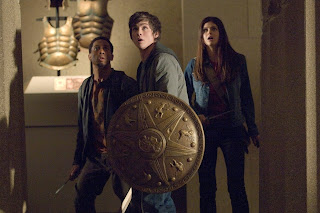 Since we’re kind of on a roll, reviewing things I really should have seen/read a long time ago, here’s confession number two: I have never read the Percy Jackson books. Not because I was willfully ignoring them, like the Uglies books, or even because I didn’t care. I’ve been planning on getting around to it for a while, I just…didn’t.

Look, when you write a review blog that updates nearly every day, you tend to consume a lot of media. But worse than that, everyone assumes that you’ve somehow managed to consume ALL the media. Until the operation goes through, I won’t be able to spontaneously be up to date on every pop culture franchise that hits a singularity. At least, not if I want to be able to watch the random weird stuff too, like documentaries on Tuvan throat singing and Bollywood action thrillers. Which I do.

All of this is to say that I still haven’t read those books, and I’m sorry. Ish. Kinda sorry. But I have now seen the first movie in the series, and in honor of its sequel coming out this past week, let’s take a look at a movie that I should have seen years ago!

Now, again, I haven’t read the books. And from what I could tell of this movie, that was my first mistake.

The movie, which was reasonably well shot and acted, though burdened by some seriously awful dialogue, didn’t make a whole lot of sense. In fact, most of it was bolstered by the Wikipedia article that I had to pause the movie to read. I really had no idea what the hell was going on half the time.

From what I can gather, this is the basic plot of the movie: Percy Jackson hates his life until the day one of his teachers tries to eat him. He discovers that he’s actually a demigod, that his best friend is really his “protector” and that he’s off to go learn how to be more godly at a summer camp for special kids. On the way to camp, he and his mother are attacked by a minotaur, because why not, and his mom apparently dies. This provides the needed impetus to make Percy excel at being a hero and not mourn his totally dead mother at all.

At camp, Percy meets Annabeth and becomes instantly infatuated. He is confused as to why this girl who has never met him in her life doesn’t immediately return his affection. Then he discovers that his mother miraculously isn’t dead, and that he has to find a magical thing to save her blah blah blah. 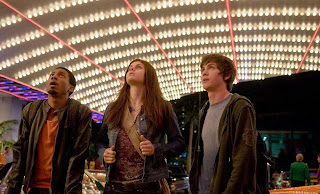 Magic quest turns into banal road trip with highlights from the Greek myths. Annabeth enters into a contrived and painful romance with Percy. Grover, the protector, stays sassy and black, and also the only interesting character in the movie.

Eventually Percy and company make their way to Hades, where they meet Hades and a sexed up Persephone. Percy discovers that the magical whatsit was with him all along, but not in a good way, and they save his mom.

Percy fights bad kid with daddy issues who stole the magical macguffin in the first place because of reasons, and then saves the day and stops a completely nonsensical war that had absolutely no stakes or reason to happen. The end.

I’m pretty sure that either I’m missing something, or that sucked big time. And I have a suspicion that it might be the latter, sad to say.

That is not, however, my biggest complaint about the film.

The absolute worst thing about this movie was the female characters. Like, hands down. Now I give a small amount of credit for the fact that there was more than one of them, and that they encompassed a variety of ages, social roles, and races. Yay. But, when you boil it down, they really kind of didn’t actually represent very much diversity, and they absolutely sucked. Because every single female character in this movie is defined by her sexual attractiveness/sexual availability. 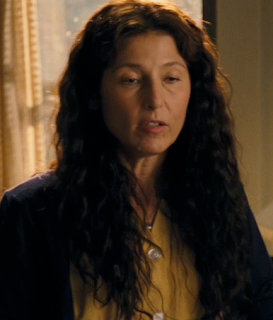 Let’s break it down and then break down and cry, shall we?

The first woman we meet in the movie is Percy’s mom, whose name escapes me, played by Catherine Keener. Now, again, I haven’t read the book, but at first glance I was pretty stoked to see this character. Most heroic types come from some sort of broken home, especially in young adult fiction, so it was nice to see a story where the lead actually had a mom. Like a real mom. A nice one too. It was refreshing.

And then we found out that his nice mom was stuck in an abusive relationship so that she could protect her only son. And she still held out a torch for the man who abandoned her. Oh, and she kinda died right at the start of her son’s heroic quest.

There is a reason why critics complain so much about Disney Moms. The absence of a mother figure, or the use of a mother’s death to spur on the hero’s journey is so common and so overused that it’s become a cliché and a trope. The emotional resonance is gone. We pretty much expect it.

More than that, though, setting up Percy’s mother to have absolutely no life outside of caring for her son, and making it so that her every waking moment since his birth has been one of sacrifice for his well being, and then killing her off (seemingly) denies her the right to be a character. She becomes a plot device, solely there for the emotional development of her offspring. She has no personhood, and she does not matter. She’s just there to make Percy look good.

Coming in second, is Annabeth, the daughter of Athena that Percy meets at demigod camp. Annabeth, played by Alexandra Daddario (who is way too old to play a high schooler), is an icy warrior maiden, who’s lived her whole life in the demigod camp. As such, she’s obsessed with tactics and battle strategies, and more than a little socially awkward. That’s all fine, actually. I appreciated having the primary fighter of our group of heroes be a girl. I even liked it.

What I didn’t like was how Annabeth was all about Percy. Not in a weirdly sexual way, exactly, but in that there was absolutely nothing to her character that wasn’t directly related to Percy.

She’s Athena’s daughter, but we really don’t know anything about what her feelings are towards her mother, or how she copes with having grown up in an internment camp for special kids. She doesn’t have any feelings that we can determine, except for an inexplicable attachment to Percy.

And honestly, it is totally inexplicable. Percy shows up in her life and assumes that because he’s a boy and clearly the hero of this story, he can best her years of dedication to her fighting skills. And he can. Because he’s the hero. It that were me, and some punk showed up and started being all awesome despite having no idea what he was doing, and accidentally insulted me, I wouldn’t want to fawn all over him. I would like to think that I’d be a better person about it and wish them well, but I wouldn’t. I’d be horrible.

Annabeth doesn’t even get the right to dislike Percy. She’s won over by his apparent charm, somehow, and quickly subsumed into his quest. Her needs are ancillary to the needs of the story, and as such, she’s completely consumed. There’s nothing left.

So she isn’t really a person either. She’s just the pretty young thing who has to be around so our hero can fall in love with someone at the end. 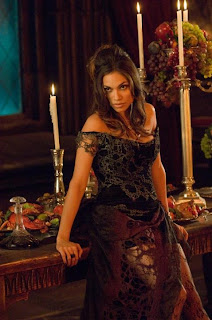 And finally, there’s Persephone, who made me deeply, deeply angry. Played by a clearly bored Rosario Dawson, Persephone is the wife of Hades, and hates her husband so much that she blatantly takes other lovers. But more than that, her whole character and part in the story is wrapped up in her sexuality. She is only ever defined as Hades’ wife. The story completely ignores the fact that she is also the daughter of Demeter, and that her time in the underworld is why we have a winter, one of the original season myths.

First and foremost, she is a wife. Secondarily, though, it’s even worse. She’s a slut. Think about how we first see her: breasts popping out of a tight dress, lasciviously stroking Grover’s cheek, sauntering… She’s all about her sexual availability. This, combined with her sole identity as a trophy wife, completely robs her of any agency as a character. All she is is a set of sexual organs in a meat suit stumbling through a plot.

Persephone saves them, sure, but she demands that Grover stay and implies heavily that he will have to sexually service her. It’s played for laughs, but it’s really deeply creepy. Is that it? Is that seriously all there is to this character? She’s just a braindead boink machine? The hell?

Now, there are other female characters in the movie, but frankly, they’re not much better. Uma Thurman as a Medusa who’s pissed at Percy because his father (Poseidon) jilted her a couple millennia ago? Not good. A substitute teacher who turns into a Fury (the embodiment of feminine rage in a super unflattering way)? Athena, who only spouts acceptable wisdom and has absolutely no bearing on the plot of the movie or the emotional arcs of a single character? The screaming lady from the garden center?

I don’t think I would have minded the apparent bad plotting of this film nearly so much if the female characters weren’t so incredibly offensive. I don’t really even mean that as an insult. It’s just a fact. 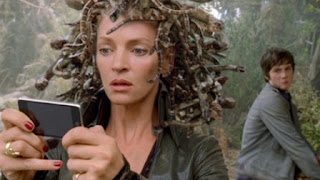 And therein lies the problem. If the female characters in your movie make no sense, have no lives of their own, and only serve to further the male character’s arc, then you deprive your story of half its audience. We like to relate to heroes too, and when you write bad lady characters, you make that really hard.

Stop making it so hard, please.

(And, on a total tangent, did anyone else find it super awkward that Kate from White Collar, who is in her mid-twenties, was playing a teenager and having a romance with a teenager? It was weird.)
Posted by Unknown at 9:00 AM