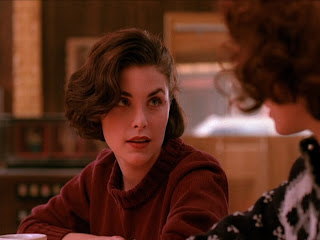 It pains me deeply to acknowledge this, since I really don’t like being made to feel old, and I get enough of that at my day job, but how many of you have even heard of Twin Peaks? I mean, it’s the internet, so I assume some of you have, but really, how many of you are completely confused right now and want me to go back to talking about Supernatural or Lost? Well, tough.

Twin Peaks is the show that made both of those shows happen. And a lot of other shows, really. It’s what paved the way for serialized ensemble dramas with fantastical elements on networks. It was one of the first shows with an ongoing mystery that couldn’t be explained by humans alone. It was weird, and scary, and original, and it made possible everything you love.

It also had some pretty interesting female characters.

The whole show revolves around a murder case: the death of Laura Palmer, town sweetheart. Now, a huge amount of the show is based on the fact that Laura Palmer wasn’t just the town good girl. By which I mean she wasn’t much of a good girl at all. Laura was into a lot of bad stuff. Drugs, prostitution, international smuggling – it kind of got really impressive.

The story looks at the way that Laura’s death influences the community and how the investigation stirs up the town as each segment of the town’s population is affected in turn. We follow all the different leads, and keep on asking the show’s basic question, “Who killed Laura Palmer?” 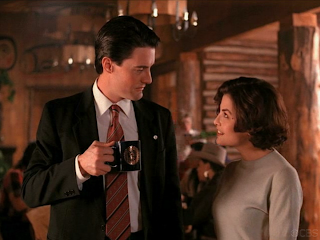 The main character of the show is inarguably FBI Special Agent Dale Cooper (Kyle McLoughlin), a completely daft and yet strangely effective detective who likes to figure out the case using techniques he learned in Tibet, and who is weirdly obsessive about pie. Without Dale Cooper, we wouldn’t have Agent Mulder, or Shawn Spencer, or a lot of the quirky cops you see on TV today.

But again, we’re not here to talk about Dale. We’re here to talk about someone who had a big crush on Dale, and whose transformation throughout the series was probably the most interesting thing to watch, even if it wasn’t the main focus. Let’s talk about Audrey Horne.

Audrey, played by the fabulous Sherilyn Fenn, first appears as a character to be a sort of anti-Laura. Laura was blonde and universally beloved. Audrey is brunette, rich, bitchy, and kind of completely insane. She’s not upset that Laura’s dead. Far from it, she seems to be pretty cool with the idea. Pile on some massive daddy issues and her desire to woo Agent Cooper (who’s pretty skeeved out by the high school girl hitting on him), and you don’t really have the recipe for a strong female character.

Or at least you wouldn’t, if Audrey stayed there. But she doesn’t.

As we delve deeper into her character, we find out more about her. Like the fact that Audrey was secretly really jealous of Laura, but also pretty grossed out. Audrey’s father always liked Laura better, but Audrey finds out that this is because her father was sleeping with Laura, and that complicates things a mite. With Dale as the only standup guy in town, and the whole high school seeming to melt into oblivion in the face of tragedy, Audrey does the only rational thing (to her) and decides to look into the mystery herself. 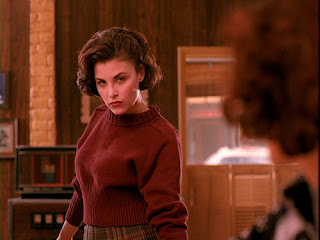 The results are mixed. That’s kind of what I love about her. She has the chutzpah to go off on her own and try to solve the mystery, but she kind of sucks at it. And sure she needs to be rescued, but she gets a lot more done than anyone else does.

But I get ahead of myself.

She manages to not just blow the lid on a prostitution ring, she uncovers drug smuggling and a plot to kill some major players in the case against Laura’s killer. But she gets caught, and Dale has to rescue her.

Here’s the thing: yes, she gets rescued. She’s pretty damsel-y there for a minute. But do not think for one second that this makes her less of an awesome female character. She got rescued because she’s impetuous and brave and stuck herself in a stupid situation, and because she trusted Dale so much that she knew he’d rescue her even if she did that. It’s not bad feminism to write a character who does that, it’s just plain interesting.

Though, as a side note, a lot of the characters on this show really aren’t good female characters. Some are, some aren’t, but there are a lot of them to choose from, and I think that puts me over the edge. 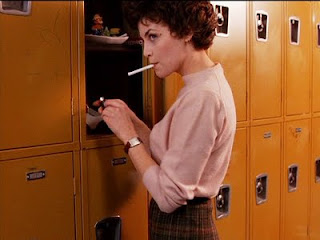 Anyway, Audrey recovers from her ordeal, only to find that her father has gone kind of nuts and that her family’s business is in the crapper. What’s a plucky, clever girl to do? She, while still in high school, mind, takes over the business, rights it, cares for her father, and even gets over her crush on Dale Cooper and starts a ridiculously cute relationship with a business rival.

Yeah, she does all of this in two seasons.

It really pisses me off whenever I try to google stuff about Audrey Horne, like for pictures or just because she makes me happy. The character seems to be remembered best for the things that least defined her. Yeah, she had good clothes, and a pretty cool sense of style. But that doesn’t make her iconic. Sure, she was really weird and that dancing scene is bizarre. And yes, she does define sex kitten pretty well in her interactions with Cooper. But.

Twin Peaks gave us a lot of things. It gave us the supernatural mystery format. It gave us serialized weirdness. It gave us David Lynch (not sure how I feel about that one, actually). But what I am most grateful for is that it gave us Audrey Horne.


And her really fabulous bitchface. 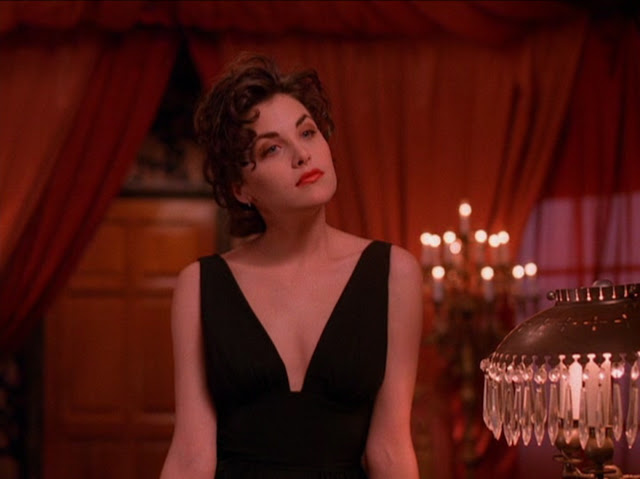