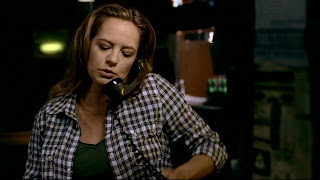 Over the years, I’ve complained a lot about the women in Supernatural. Other people have even complained with me. By and large, the show, which I love deeply and intensely, is pretty awful to its female characters. But it isn’t all awful. And sometimes, it’s actually very, very good.

Now, recent viewers of the show might not know who Ellen is, and with pretty good reason. She was only ever in about seven episodes, mostly in season two, but with appearances in seasons five and six. She’s dead now, like most of the other non-Winchester characters to have ever appeared on the show, but Ellen has cast a lingering legacy. A good one.

Ellen Harvelle (played by Samantha Ferris) should by all rights have just been a throwaway character. She’s the mother of a fellow hunter the boys fall in with, and runs a bar that hunters happen to frequent: the Roadhouse. Jo, her daughter, is an aspiring hunter who wants to fill her dead father’s shoes, and with the season two arc following the emotional fallout of John Winchester’s death, Jo is perfect thematically resonant.

Ellen, however, isn’t. Not really. I mean, she’s cool and all. She shows up and the first thing we ever see her do is pull a gun on the boys and scare the crap out of Dean. But she isn’t as immediately connected to their story. It’s hard to see how she plays in. The boys don’t have a mother, after all. There is no easy parallel to compare her to. 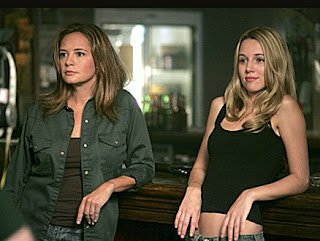 Instead, the writers are forced to actually use their imaginations to flesh out her character. Perish the thought.

Rather than making Ellen’s character relate deeply and meaningfully to the boys, the writers took the more adventurous route of making Ellen her own person, and making her most meaningful and deep relationship on the show her daughter. This certainly makes sense in real life, but it’s surprising to see in a television show. After all, Jo was never a main character, so having Ellen stay so focused on her was a relatively odd choice.

And this isn’t to say that Ellen never really interacted with anyone else. She had a fantastic relationship with Dean, a cursory one with Sam, a friendly one with Castiel, and a potentially romantic one with Bobby. But her real focus was always her daughter. As well it should be.

Ellen used to be married. It’s one of the first things we know about her. Her husband, Bill, was a hunter. He died while hunting with the Winchester’s father, John. Ellen blames John, pretty blatantly for the death of her husband. But when John Winchester’s sons show up at her doorstep asking for help, she doesn’t turn them away. She helps them. She gives them a place to grieve for a man she kind of hated. And she gives them time.

That’s what I mean when I say she’s strong. 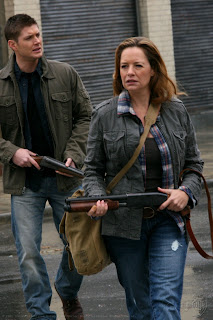 When her daughter, her only daughter, the one thing she has left to remind her of her late husband, decides she wants to hunt, Ellen understandably freaks out. When that same daughter goes out hunting with the sons of the guys who got her husband killed, she totally goes bonkers. But she doesn’t let that change her. She still loves the boys, and she still helps them. She’s pissed, obviously, but she doesn’t let her anger dissuade her from the right thing to do.

And later, when her daughter absolutely cannot be moved from hunting, Ellen follows her and joins up. She chooses to do the thing that killed her husband and threatens her daughter, because to not do it would be so much worse. When she finds out that they’re in the midst of the apocalypse, her reaction isn’t to suggest she and Jo hide, or that it might go away. She makes it clear that they’re in. They’re totally in. Even though she’s scared and scared for her daughter.

And when Jo gets hurt, fatally hurt, Ellen doesn’t run. She doesn’t even really cry until the very end. What she does is tell the boys to go. That’s she’s got this. She sits down in an abandoned building and holds her daughter close as Jo bleeds out. And then she presses the trigger, and takes out a pack of hellhounds with her.

That’s what I mean.

Now, I could go on, listing all of the ways I think Ellen is absolutely awesome, but I also want to make a larger point. 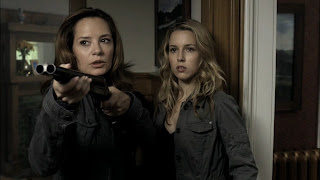 Ellen Harvelle is a strong female character. Yes, she’s older. Yeah, she’s not actually a major character on the show in question. Sure, she’s not skinny. And whatever, she’s not a superhero or natural fighter. Ellen is strong because she is written well. Because she has agency as a character. And most especially, because she takes everything thrown at her with grace and sass, and she refuses to take her life lying down.

And because she aimed a gun at the Winchesters when she met them, then helped then anyway.