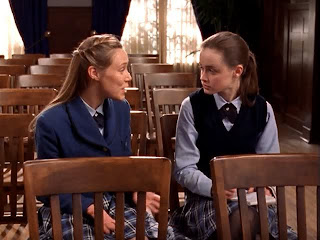 Allow me to express my love for Paris Gellar, the queen bitch of Stars Hollow (well, really most of New England), and yet one of the most kind and compassionate characters television has ever brought us with a series of exclamation marks. Like so: !!!!!!!!!!!

In case you couldn’t tell, I like her just a little. She’s pretty awesome.

Paris Gellar (Liza Weil) was supposed to be a one-off character in the first season of Gilmore Girls, a villain to attack Rory and show us that her new school was serious business. But it turns out that viewers liked Paris, and the writers liked her too. She added new things to the show, a new perspective, and a new side of Rory that we’d never really thought about. She was interesting, and so Paris stuck around. And then Paris became a main character. And then somewhere along the way, we (I) realized that Paris was way more interesting than Rory and she became the main character. At least for me.

But I shall back up, since I assume that at least someone reading this has never seen the witty brilliance that is Gilmore Girls. PS, you should really get on that, hypothetical person.

Gilmore Girls is a mostly excellent (ignore the last two seasons) female-centric show about growing up, mothers and daughters, and small town life. It sounds like the kind of thing that would totally make me gag, but it doesn’t, for the simple reason that it is very very good. 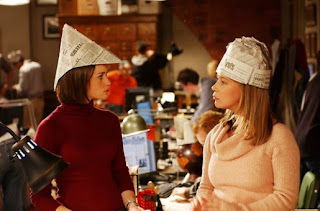 The show follows Lorelai and Lorelai Gilmore, a mother and daughter (who, yes, share the same name). Lorelai and Rory, as she’s better known, are the ridiculously close parent-child duo of our dreams and/or nightmares – the kind of people who say without irony that they are each other’s best friends and who can’t go a day without talking. Again, seems like it should be annoying, but it isn’t.

Lorelai (Lauren Graham) is a single mother who got knocked up at sixteen, kept the baby because of family pressure, then ran away when her daughter was a year old and started a brand new life in a small town. Sixteen years later they’re still in that small town. Rory (Alexis Bledel) is all grown up and about to go off to private school, and Lorelai now manages the inn where she first found work as a housekeeper.

Unfortunately for them, Rory’s new private school is hella expensive, and since Lorelai is a single parent, she doesn’t have too many options. But she knows her kid is smart and deserves the best opportunities she can give, so Lorelai sucks up her pride and goes to ask her parents, who are incredibly wealthy Hartford socialites, for help paying for Rory’s tuition. And that pretty much gets the story rolling.

Over the seasons the girls go through love interests like Kleenex, relationships change, drama comes and goes, but at its heart the story is always about mothers and daughters. Lorelai and Rory’s relationship can be amazing or bumpy, and when you add Emily (Lorelai’s mother, played by the awesome Kelly Bishop) into the mix it only gets more interesting. 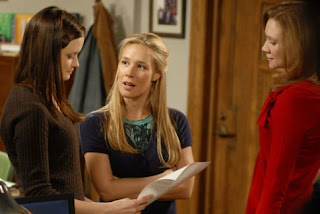 So, like I said, Paris showed up as a part-time villain right when Rory started at her new school. Paris was everything Rory wasn’t: a bitchy, rich, aggressive snob who demanded to know why the school was letting in country bumpkins like Gilmore over there. Paris was mean. And we loved her.

Because Rory was so nice, you know? Rory was the small town sweetheart. She liked reading and books and tea and taking care of her silly mother and eating too much junk food while she watched television. But Paris wasn’t any of that. Paris was a poor little rich girl, the kind of kid whose parents barely remember she’s alive, who thrives on competition and rage, and who was so stressed out by the time she graduated high school that she had a life coach on speed dial.

In short, Paris made Rory interesting.

People don’t often like to admit this, but women are competitive too. Sure, society precludes us from expressing this via athletic aggression most of the time, but we need to get our ya-yas out somewhere. Teenage girls especially have to deal with the questions of identity and self-worth, and then how that relates to everyone else in the room. Paris knew that. Rory didn’t. But she quickly found out.

I feel weird saying this, but a huge part of the reason I like Paris as a character is that she made me like Rory more as a character. And she did that by making Rory just a touch more unlikable. If that makes sense.

Without Paris, Rory was the sweet, nice girl. She was never challenged or forced to face her own insecurities. But then in blows Paris Gellar, who thinks Rory is a mess who can’t compete, and all of a sudden that’s what Rory wants more than anything in the world. To compete. To show Paris what she can do. 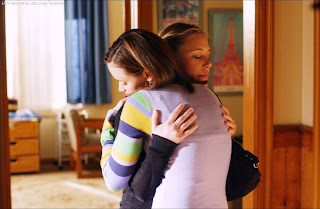 It’s really good for her. And it’s good for us too. Because without Paris, Rory is perfect. Perfectly boring. She doesn’t get in trouble, she doesn’t discover her own dark side, and she doesn’t ever challenge herself. Rory needs Paris, and Paris needs Rory.

Paris needs Rory for more obvious reasons in the show. She needs her because, contrary to her constant assertions, Paris doesn’t like being the best alone. She would much prefer to be the best because she earned it, not because she terrified all the competition into withdrawal. She likes Rory because Rory isn’t scare of her, because Rory bites back sometimes, and because Rory actually genuinely cares about Paris and her well-being.

I could just end it here on the kumbayas of their epic lady friendship, but I won’t. Instead, I want to talk about the later seasons. Because those are what really sold me on Paris.

Paris and Rory compete their ways through high school, and finally wind up as very good friends, much to both of their surprise. When Rory starts Yale, comfortable in the knowledge that she is leaving high school behind, she winds up walking into her dorm and discovering that Paris is her roommate, because Paris wasn’t actually ready to leave high school behind. Having had a nervous breakdown in senior year, Paris is actually ready to start college as a newer, calmer person.

That doesn’t really work out. 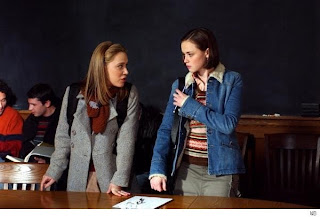 But over time she changes. She learns how to relax, how to control her temper (sometimes), and how to let people in and be vulnerable. Paris learns how to be a human being, not just a competition machine.

When Rory starts to flail and wonder what she’s doing with her life and why she’s even bothering to try so hard, Paris is the one who tells her to buck up cupcake. That she didn’t fight Rory so hard just for Rory to give up now. That maybe Rory won’t always be the best, but that not-trying is far worse than second place.

Paris grows up, and she changes, and she becomes a better person. Not a different person, but a better one. She’s still the same competitive bitch, but now she knows how and when to unleash her crazy. She never becomes nice. And that’s okay.

Really, it’s more than okay. Paris is a type we almost never get to see on TV or anywhere. It’s pretty much Paris and Cutthroat Bitch (Amber) from House standing on that platform alone. We don’t like seeing our female heroes as aggressive go-getters. We call them bitches. A lot. And make fun of them. Suggest they “get a life”. And that’s wrong.


We need Paris Gellar. We are Rory Gilmore, all sweet and nice, and we need a Paris to come in here, tell us that we’re pathetic, and make us work our butts off to prove we aren’t.