Holy Crap This Is Racist (Oz the Great and Powerful) 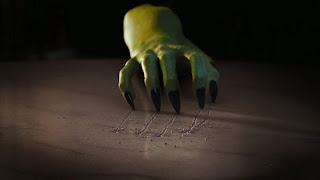 Yes, I am aware that this movie came out almost six months ago. But since I was on hiatus when it came out, we’re gonna talk about it now. Because reasons.

I was still working at a talent agency when they started filming this movie, and when the casting briefs were going around, and even then there were some lingering questions popping up.

Like, what’s this movie actually about, anyways? Why the hell are so many high level actresses in this? And, James Franco? Really?

I don’t mean that last one in a derogatory way, more in a confused way. Because we really didn’t get why they were casting him, or Michelle Williams, or Mila Kunis, or Rachel Weisz. It kind of seemed like they were overdosing on talent, and everyone was starting to get a little…giddy? Like, if so many incredibly talented people were on board, then this was obviously going to be a good movie, right?

So at long last the movie comes out, and shock of shocks, it isn’t very good. The story is disjointed and weird, the characters are poorly constructed, and the whole thing smacks of big paychecks and big checking out. Oh, the actors are good, but they have so little to work with that it doesn’t matter. And the story utterly sucks. 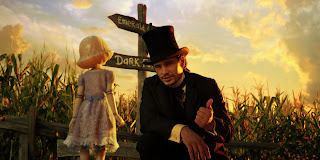 But here’s the bit I wasn’t actually expecting, or at the very least, wasn’t prepared for. This movie is incredibly racist.

Hold onto your hats for a second, and let’s talk about why.

For starters, the film follows a young stage magician and small-time con artist (James Franco) who gets thrown by a storm into the magical land of Oz. The con artist, whose name actually is Oz, is quickly confused for a great and powerful wizard who’s supposed to come and return peace to the land. Because all the people are so sweet and simple-minded, they assume that anyone who turns up with the same name as their country must be heaven-sent. So, whatever, off we go.

Oz is quickly rescued by Theodora (Mila Kunis), the lovely and naïve witch who rules Oz along with her sister. Theodora has never been in love before, and she falls hard for Oz, only to have him play her like he plays all the women he comes in contact with. Oz, hearing that being their wizard comes with a lot of money, decides to take Theodora up on her offer to save the country, and comes to the capital.

There he meets Evanora (Rachel Weisz), who’s a bit more savvy than her sister. Evanora actually is a wicked witch, though without the green skin, and she has taken the throne of the kingdom by force. Not that she tells Oz any of this. Instead, she tells him to steal Glinda’s wand, and he can have as much gold as he wants. 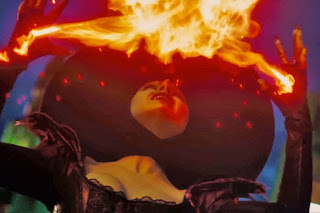 Obviously, Glinda (Michelle Williams) is actually the good guy, and she persuades Oz to help her instead, and romance and blarg. Theodora is incredibly hurt that Oz has betrayed her, and when manipulated by Evanora turns to the dark side. And also turns green, because obviously.

And then there’s a fight and some spells, and Oz eventually takes down the wicked witches with the power of stage magic and trickery and it’s all very sweet and kind of dumb.

Let’s get to the part where it’s racist.

Well, for starters, all of the main characters are white. But that’s too easy. It’s much worse than that. Let’s look at this – the worse a character is, the darker skinned she is. Don’t believe me? Look at the casting.

Glinda is played by Michelle Williams, who is incredibly pale, and, in this movie, white blonde. She’s sweet and lovely and loving, all filled with goodness, and she’s also a skinny white blue-eyed blonde. There’s a China Doll Girl too, who is also blue-eyed and blonde, who is also good. So clearly being pale and blonde means you’re the good guys. Right.

And then there are the two evil witches, who are both brown-eyed brunettes. But it’s much worse than that. Because Evanora (Weisz) is the paler of the two, and the less evil. Theodora (Kunis), whose skin is a bit darker, becomes the more insanely evil witch, and her change is noted by her change in skin color. That’s right – evil is having brown hair and non-white skin. 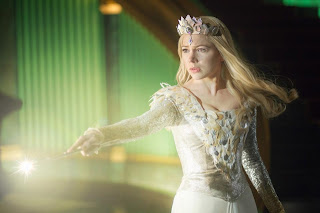 Let’s not forget the sidekicks either! There’s this horrible scene where everyone’s sidekicks are sitting together, and you look over them for a second and it’s just… They’re all black. Except for Oz’s sidekick, who is a monkey. In a bellhop uniform. Oh right, not only are all the sidekicks black, all the characters of color in the film perform stereotypical serving-class jobs. And sometimes they sing and dance while doing it.

Look, I’m not saying that the producers looked at their casting sheets and decided to make a racist fairytale. I doubt it even crossed their minds. What I really think happened was a lot simpler:

“Hey, Joe, our movie doesn’t really have any characters of color in it. Should we do something about that?”

“Hell yes! We are a progressive movie studio. We can cast colorblind on the sidekicks, maybe get some diversity in the group scenes. How does that sound?”

“What about the leads? Should we cast them colorblind?”

“Well, everyone remembers the original, and all those characters are white in the first Wizard of Oz, so we should probably stick with them being white. For consistency.” 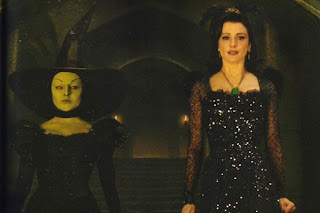 But it’s still racist. And it still shows a pretty big problem in our cultural norms.

Why do I say that? Well, because when I complained about that, walking out of the theater with my long-suffering friend Dan, I was met with a lot of “You’re blowing this out of proportion,” and “Do you like anything?” reactions. Not from Dan, of course, but from other people. 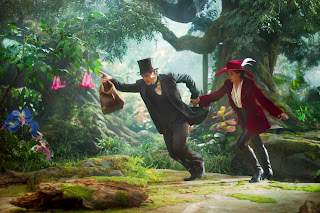 Imagine if they had really been bold. If they’d decided that, screw the original, Glinda doesn’t have to be white. Neither do Evanora or Theodora or, hell, even Oz! Imagine a movie with Lucy Liu and Rinko Kikuchi as the evil witch sisters, with Gina Torres tearing it up as Glinda, and Donald Glover waltzing through it as Oz. I’d watch the hell out of that. It would be interesting.

But they didn’t do that, and it really doesn’t look like they will anytime soon. Because Hollywood is afraid of change. Change might mean that there’s less money, and they can’t abide that idea. It is, after all, a business.


So what if commercials, which exist explicitly for the purpose of making money, have become consistently less white over the years and are now the most diverse form of media representation? And so what if our country is no longer majority white (well, soon, anyways)? Hollywood hates change. And unless we remind them that we actually like it, we won’t get it for a very long time. 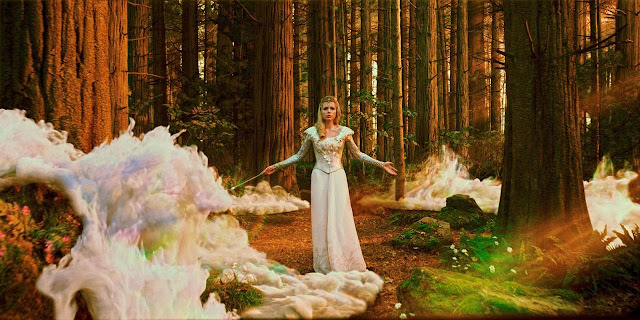