Pilot Season: Dads (Racism, Sexism, Ageism, What Else You Got?) 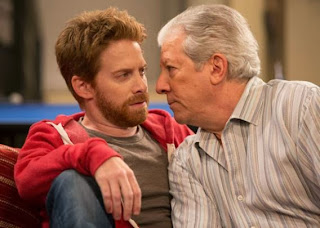 We’re only two shows into Pilot Season, and already I have found something to loathe. New record? If only.

Okay. No beating around the bush. Let’s get to it. Dads is a multi-camera comedy coming from Seth McFarlane and airing on CBS. It stars Seth Green and Giovanni Ribisi as successful videogame developers and childhood friends who both have to deal with their overbearing and emotionally distant fathers.

They do this by complaining, being horrible people, and occasional racism.

The pilot episode comes in as the boys are getting ready to get some new investors for their videogame company. Ribisi’s character, Warner, lives with his father, or rather, his father lives with him. A traditional businessman who never managed to turn a profit on anything, Warner’s dad (played by Martin Mull) is obsessed with his son’s job and constantly trying to contribute. Only he’s terrible at it and always makes things worse.

Warner’s wife, Camilla (Erin Pineda), is fed up with having his father live with them, as Warner’s dad never bothers to clean up after himself, asks her to pretend to be his secretary, and likes walking around without pants. But Warner can’t bring himself to chastise his father, because as he says, his dad is like a big golden retriever. It messes up all the time, but it’s always just so happy to see you.

On the other side of the awfulness spectrum is Eli (Green), the manchild side of this bromance. Eli happily has no contact with his own terrible father, living a life of carefree casual sex and self-involvement, at least until his dad flies into town for his surprise birthday party and demands to crash at his apartment. 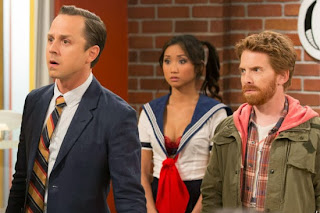 Eli’s father (Peter Riegert) is a scumbag, racist, and prone to telling the most embarrassing possible stories about Eli in public. He also left Eli’s mother, squandered all his money, and now needs a place to live. He ends up living with Eli by the end of the pilot because of reasons I guess.

Also there’s that subplot with the foreign investors and some seriously scorching racism that we’ll get to in a minute.

So, for starters, I don’t love this show’s premise. Nothing about this idea is healthy or particularly interesting. The whole idea behind the show is that these two successful men have to deal with their deadbeat dads reentering their lives, and hijinks ensue. It’s just, if the dads are really so horrible, and the men have grown up so much, then why is this supposed to be funny? It’s really just tragic.

The problem here is that no one on the show is really a decent human being. The fathers are terrible. There’s no question there. But the sons are equally bad. And the worst part is that while the fathers are excoriated for their flaws, the sons are lionized by the show for indulging in their bad habits.

Yeah, no, seriously, this show is super racist and I hate it. 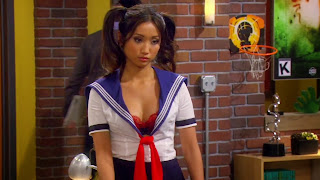 The subplot with the investors is a maelstrom of racist stereotypes, and while some painful comedy might have been wrung from it if the whole thing had been sent up at the end and lampshaded as racist, it wasn’t.

The investors in question are Chinese, and Eli and Warner ask their only Asian employee, played by Brenda Song, to dress up in a Japanese schoolgirl costume for the meeting. They ask her to cover her mouth and giggle at appropriate intervals.

Now, to her credit, Song’s character uses this blatant sexism and racism to her benefit, giving herself a promotion and a week of paid vacation for agreeing to prostitute herself for the business, but it doesn’t make this okay. And later, when the meeting is murdered by Warner’s dad’s racist remarks, we’re left wondering something very simple: how was that the racism that made the investors leave, and not the whole trying to seduce Chinese businessmen with a Japanese cultural icon thing?

And then at the end of the episode the whole issue is resolved because the Chinese translator sent Song’s character a picture of his penis, and she used it to blackmail him into making the deal go through. Because his penis was apparently very small. Ugh.

Look, I get that sometimes we can use racist stereotypes for humor, by showing how false they are, by sending them up, usually, or suggesting the futility of stereotypes in general, but I don’t think this is either of those. This is just straight up racist. Because, if you didn’t know, being ironically racist is still being mother-freaking racist. 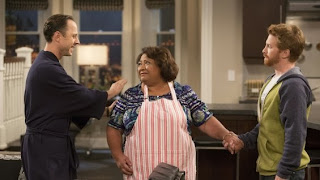 This isn’t even the only instance of rampant racism in the pilot episode. Eli’s maid, Edna (Tonita Castro), is portrayed as lazy and shiftless, conning him into giving her time off. Camilla is described as a “fiery Latina” and Eli’s dad confuses her for the maid. There are three female characters on the show, all of them women of color, and every single one is the subject of racist comments in the first episode.

So, to recap, we have a show that follows the adventures of two affluent white men condescending to deal with their own fathers, and managing to handle the situation with the absolute bare minimum of tact or grace, and also being super duper racist to all the women in their lives.

This show makes my heart hurt. And also very sad, because the people in it are incredibly talented, but they’re hitched to a product that just isn’t good. It isn’t good in any sense of the word. It adds no goodness to the universe by its existence.


Please, don’t watch this show. Let it be cancelled early and quietly so that we can all forget this happened.