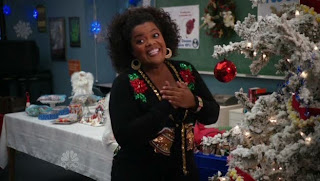 I was looking back through the past two months of SFC Friday posts, and I realized something that makes me really sad: Shirley is the first character of color to appear in these posts. That is total poop. She is awesome, and should have come up sooner. I apologize for that.

So, that having been said, do I really have to explain why Shirley Bennett (Yvette Nicole Brown) deserves her spot on Strong Female Character Fridays?

Shirley, who appears as one of the lead ensemble characters on Community, is a perfect example of why making a character good and decent and caring by no means makes them weak and uncomplicated and boring. Not even a little bit, no sir. But I’m getting ahead of myself here.

Community ostensibly follows the exploits of a study group at a community college. The study group is comprised of a whole host of social misfits, and Shirley is just one of the many generic stereotypes to appear. Only, after just a few minutes of the show you realize she’s really not a stereotype at all, and this is kind of awesome. 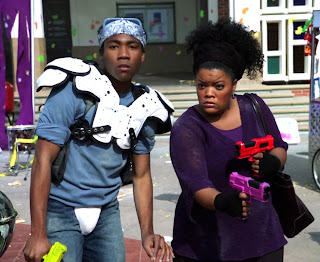 For starters, there’s the obvious stuff. Shirley is a divorced mother of three. Having discovered that her husband was cheating on her with a stripper, she decided to leave him and get a business degree so that she can start her own food company and be financially independent. She wants to provide for her kids, and make sure that she’ll be stable and secure for the rest of her life. She’s religious (deeply), a bit conservative, and often the butt of the joke, with a tendency to slide into “sassy black lady territory”. But that’s just the surface.

Underneath, we find out that Shirley is a hell of a lot more complicated than that, and it’s all a good thing. Yes, she’s deeply religious. But that doesn’t mean she’s not occasionally incredibly judgmental, or prideful, or capable of falling into extra-marital sex with her ex-husband, or emotional blackmail… The list goes on, and it all just goes to show that Shirley is a character with flaws. Which is good. Flaws are a good thing in a character.

What I really love, though, is that Shirley’s flaws are really just a reflection of her good qualities. That’s kind of weird to say, but trust me, it makes sense. And it’s really good writing to boot.

Shirley is a caring, mothering figure. That’s awesome, right? Well, not if the people you’re trying to mother don’t always want to be mothered. Sometimes people just want to be left alone. Sometimes you’re smothering them. And sometimes you’re using your desire to push baked goods on them as an emotional crutch because you think that the only reason they’ll keep you around is if you feed them. And they know it. 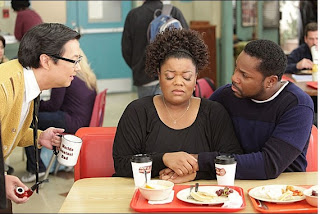 She’s religious, but that can be a good and a bad thing. It’s a great quality, because it means that Shirley believes in helping the underdog, in forgiveness, and in giving to those less fortunate (definitions of less fortunate may vary). It’s awful when Shirley uses her religion to judge her fellow students and imposes her own morality on them. Plus side, she cares deeply about their immortal souls. Downside, she tells them morality parables about the devil chain-sawing them to bits while they’re stuck in hell. You get the picture.

But sometimes she’s too strong. Well, not exactly too strong, but more focused on being strong too much. Shirley has a tendency to go overboard. To fall off the strong-but-serene wagon and straight into strong-and-also-kind-of-menacing. She’s a reformed bully, a terror to deans and teachers alike, and completely okay with manipulating and outright yelling her way through. 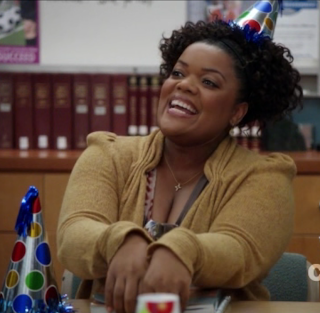 Why is that awesome? Because it’s true. Rarely is there a big discrepancy between our flaws and virtues. We aren’t just random character sheets of facts, we’re people, made of experiences that shape us, good days and bad days, all sorts of things. I know that my intelligence and willingness to help others is one of my better qualities. I also know that one of my biggest flaws is my tendency to think I know better than everyone else. See?

It’s also how Shirley ended up as one of the most interesting characters of color on TV. She’s not a saint. It would be so easy to make her a saint, and I love Community for refusing to do it. A religious, divorced mother of three played by a black woman? So easy to make her the moral sounding board of the show, to make her a beautiful, courageous woman whose every word is wisdom and light and to whom all the other characters go for advice. They could have done that. Instead, they made her real. 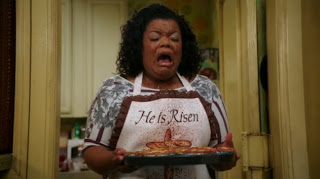 Maybe that’s why I like her so much. Say what you will about her, Shirley tries.

There’s more to be said here, of course. About how Shirley is a great example of how to write a traditionally feminine character who is nonetheless incredibly strong as a person. About how she’s beautifully flawed and therefore a better role model because of it. About how she’s a great cook. About lots of things.

But I think I’m going to leave you with this idea: When asked how he writes female characters so well, George RR Martin replied, “Well, I’ve always considered women to be people.”


And that’s kind of all this is. Shirley Bennett is a person, and as such she has faults and virtues. That’s good. That’s fine. That’s what makes her strong.