Think About It (Helen and Troy's Epic Road Quest) 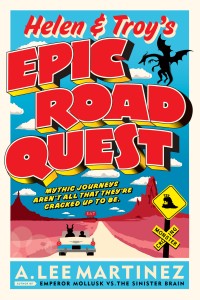 This seems as apt a time as ever to review one of my new favorite books from one of my longtime favorite authors. The book in question is Helen and Troy’s Epic Road Quest, by A. Lee Martinez. Martinez has a habit of writing books I love, and this one was no exception. But it was different. Different from most things, actually.

So, as you may or may not have figured out, I have a love of all things that break the fourth wall and acknowledge the conventions of stories, the made-up nature of the universe, or just wink slyly at the audience. They make me happy. This book fits well within the pattern, because it’s pretty much just Joseph Campbell’s Monomyth theory turned into a young adult adventure novel.

Don’t worry if you didn’t quite follow all of that. We’ll go over it in a little bit.

Helen and Troy’s Epic Road Quest follows the adventures of Helen and Troy, two all-American kids who work together at a fast food chain. Helen, who happens to be a Minotaur (and Enchanted American, if you don’t mind), is shocked one night when her manager asks her to stay late, and then tries to sacrifice her to the Lost God. Troy manages to barge in as well, and in the confusion the Lost God eats their manager and brands the two unlucky teenagers with the need to go on a quest. They have to collect all the Lost God’s artifacts, and bring them to the assigned place, so that he can rise from his imprisonment blah blah blah.

If they don’t do it, they’ll die, which is pretty good motivation. So with their parents’ sort-of blessing, and some help from the National Questing Bureau, they head off on an adventure.

The conceit of the book is that it isn’t just a book about an adventure, it’s a book about every adventure. The road trip Helen and Troy embark on doesn’t just adhere to the rules of mythic storytelling, it singles them out and explains them. Before they go anywhere, they have to “look for a sign”. It turns out that this sign is an actual literal road sign for “Auger Street”, which leads them right to the Oracle, who tells them what they’re going to need to do. It’s stuff like that. Clever, witty stuff that always shows its hand. 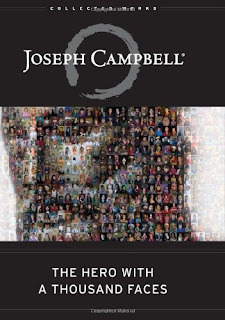 They stop for a night at a motel in the desert, only to find that they have to fight the Cyclops before they leave. It’s a part of the quest, and they’re not allowed to go on unless they do. Town policy. If they lose, then they’ll fail their quest and have to go home. If they win, then they get to take their pick of the trophy shed and go on to the next obstacle.

It’s all very organized, with questing licenses, dragon preserves, and a horde of angry orcs following behind them, but the real beauty of the story is the relationship between Helen and Troy. Helen, for all of her being seven feet tall and covered with fur, is just a normal teenage girl. She has a crush on Troy, who’s incredibly perfect. And Troy, who has a crush on Helen, is baffled by the idea of having to actually work to get a girl he really and truly likes. It’s cute. And it’s very well-written.

I said all of this was going to come back around to Joseph Campbell’s Monomyth theory, though, so let’s get over to that part of things.

The Monomyth theory basically claims that all epic stories are pretty much the same. Oh, the details vary, but the specifics of the story always come down to the same basic elements. It’s called the Hero’s Journey. Obviously, you’ve got the Hero, and he goes on a quest, right? Well, he’ll probably go on the quest because gets a Call to Adventure, which can be a person or a thing, gave him the idea/forced him to do it. In the case of Helen and Troy, their call comes from the Lost God (who, disgustingly enough, appears as an animated pile of raw hamburger).

But then they have to Refuse the Call, because hero’s are fickle, fickle things. In the end they always pick it back up because of course they do, but they need to refuse it so that we understand the stakes involved. If Helen and Troy don’t help the Lost God, they’ll die. Those kind of stakes. 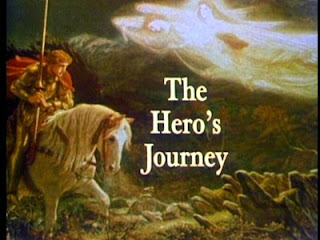 Okay, the whole thing is really long and I could go through the Hero’s Journey point by point, but instead, I’m going to make you watch this video on youtube which explains it better than I can, and when you’re done, come back to me for the finish.

The point of all of this is that the Monomyth, which I quite like, is about the basic stories that underpin our understanding of the world. It’s not about how Star Wars has a more epic Call to Adventure than The Big Lebowski does, it’s about how those two stories, as ridiculously different as they seem, are actually one and the same.

Back to Helen and Troy’s Epic Road Quest. I wanted to talk about it to begin with because it’s just a very good book, with a lovely love story and a seriously awesome female character, but I also wanted to point out this whole Monomyth thing because this book actually subverts the norm while explaining it.

That whole Joseph Campbell thing I went through with you? Well one of its biggest criticisms is that it’s completely geared towards stories about white men. And, to be fair, it kind of is. Female characters are usually viewed as exceptional in this story context, which makes a point that they are, therefore, less likely to be heroes than men. And we all know that’s crap.

I think that while HATERQ (best acronym ever?) does follow the Hero’s Journey and clearly likes it, it also opens the room up for interpretation. Helen is more the hero of the story than Troy is, and neither of them is exactly white. Helen, moreover, is not a stereotypically attractive female character. She’s got fur. And horns. And she’s over seven feet tall. She can bench press a car. And she has hooves. She has a tail.

Despite all of this, though, Helen is our hero. More than that, she’s an object of romantic love and attraction, without having to be kissed by a handsome prince and turned pretty. She’s pretty the way she is.

That in and of itself would be enough for me to love the book, which deftly skewers the whole “change to be loved” thing, but there’s more. The book itself lovingly and gently embraces all the traditions of mythic storytelling, then asks you if that’s the best we can do. Do we have to follow these traditions and tropes? Or can we break out on our own? Will we survive if we try?


I think if you were to take anything away from this, I’d like it to be that you should totally read this book, but I’d also like you to remember this: Liking something, even something as overreaching and academic as the Monomyth, doesn’t mean you can’t be critical of it too. Sometimes, really liking an idea means knowing how what questions you should be asking, and figuring it out for yourself. 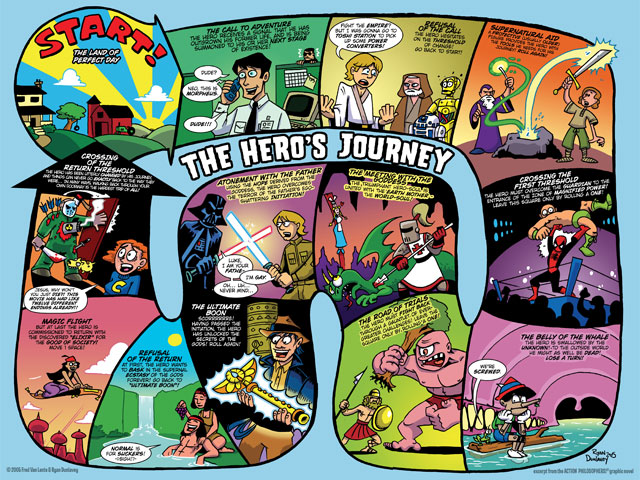