Well Written, But Lacking A Touch of Soul (Rapture of the Nerds) 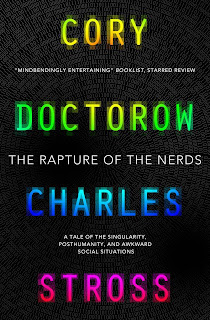 I want to start off this article in a way that might make you a teensy bit nervous. As it probably should. I like Cory Doctorow. I think he’s a good writer. I enjoy most of the things he’s written, and he seems like a lovely human being. I really appreciate all the work he does with the Electronic Frontier Foundation and combatting copyright laws and all that. Seriously, I’m a huge fan.

I don’t really love Rapture of the Nerds, which he co-wrote with Charles Stross. I’ve not read anything by Stross before, but I have read some stuff by Doctorow, and this book fits very easily into that canon. Well, there was a lot (a LOT) more sex stuff in it than usual, and I think I can chalk that up to Stross’ influence, but the base of the story seems pretty Doctorow-standard.

Let me see if I can sum this up for you. Bear in mind, it’s kind of hard because the story is seven different flavors of bonkers.

Huw is a Welsh Luddite living several decades after the “Singularity” – the moment when humanity en masse ascended to take their place in the stars, and most of the nerds or technologically inclined people in the world shed their mortal bodies to live in a cloud hivemind out past Jupiter.

Following so far? Good. The people left on Earth then are either the ones who absolutely hate technology, like Huw, or are incredibly religious, or are total hedonists who can’t bear the idea of not being allowed actual sensory stimulation. 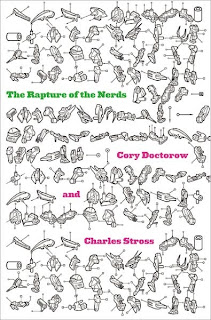 Mostly, the Cloud doesn’t make contact with Earth, but every once in a while it’ll send down some new technology or idea that could radically change the planet, and the Earth has set up committees to determine which of these ideas get used. Jury duty.

Huw gets jury duty on just one such of these cases, and flies down to Libya where he enters a courtroom filled (suspiciously) with people he knows, and proceeds to accidentally eat the technology in question. And then run for his life.

The tech, which is a sort of communication device and also alien being, makes him sick for a while, and takes him on a wild and wandering journey. Along for the ride are Ade, a constantly conniving “friend” who sells Huw to North American fundamentalists, and Bonnie, a gender-switching techno-enthusiast. Huw gets constantly thrown in and out of jams, is always fleeing some country or another, and eventually ends up in the Cloud itself, the one place he really hates.

There, he has to deal with the question of identity and reality. Is this any less real for taking place in cyberspace? Oh, and by the way, that alien ambassador hiding in your stomach is here to judge whether or not human beings must be annihilated before they can wreak havoc on the Universe. Congratulations, Huw, you’ve just become mankind’s defender.

If that all sounds overwhelmingly weird to you, congratulations because it totally is. But it’s also a pretty lively read, and reasonably entertaining. A bit graphic in places, and like I said before, deeply and profoundly weird, but whatever. This is cyberpunk and this is science-fiction. Weird is what we do. 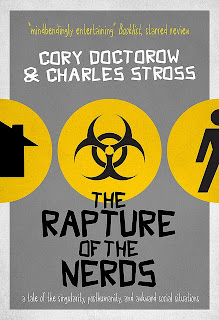 But you’re not here for a review where I just tell you if it was good or bad. Let’s be real. If you wanted that, you could go somewhere else where they have much more concise judgments and functional commenting systems (still working on that, sorry guys!). No, I want to talk about something much deeper here. What does this book actually mean?

And that’s the thing. I have no idea. And I’m starting to suspect that it might not really mean anything in the end. Which bothers me.

You see, I don’t like stories that are written with an obvious message. They’re usually preachy and not very good. But stories that happen to have a larger message are generally quite good. Because when you write a story, you put some of yourself into it. You put a little bit of who you are, what you believe, and what you want for the world into every word you write. Sometimes that’s overbearing. Sometimes that’s awesome. But either way, it’s always there.

Tell me a story and I’ll tell you who you are. You should be able to understand something about a person’s soul based on the stories they tell you.

The problem I have with Cory Doctorow is that I have no idea who he is. I’ve read four, maybe five, of his books, and I have no flipping clue who he is as a person. That’s kind of weird.

Oh, the books are technically excellent, with compelling characters, intriguing plots, and lots of little touches that make the worlds come alive and engage you fully. I loved all the details in Little Brother and the whole base concept of Eastern Standard Tribe is brilliant. I just feel like there’s something missing. Soul. I feel like the stories are missing soul. 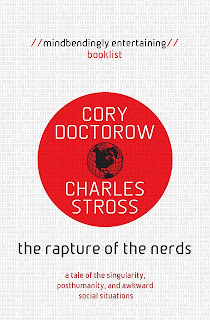 Because ultimately, none of his stories really say anything. Well, that’s not true. They say lots of things about technology and freedom of information and our evolving world, but they don’t say anything about us. Doctorow’s stories don’t make me wonder at humanity. They don’t engage my heart. They don’t even touch it. It’s all cold, hard intellectually stimulating stuff, but not once does it show me who these people actually are. And it never asks me who I am.

It sounds all wibbly and new-agey, but a good story should make you ask yourself who you are. Don’t they? When you read Harry Potter, don’t you immediately wonder which House you would be in? (Ravenclaw, ftw!). Or when you watch Lord of the Rings, you start to think things like, “Dude, I am totally a Hobbit!” You identify, and through the events and characters of the story, you come to a better understanding of yourself as a person. Maybe you even grow a little bit.

So when a book doesn’t do that, when a movie fails to ask me anything, and when nothing is given, I feel cold. I feel empty. And I feel sad.

I want to know who you are. That’s why I read so much. I want to know your story, the one you want to tell me. It’s also partially why badly-written stories offend me so much. If you’re going to tell a story so much, a story that matters so incredibly deeply, then you should put the time into making it good. Because it matters. A lot. More than most things.

So back to Rapture of the Nerds. From a technical aspect, it’s not bad. And I’m sure that some people did find themselves asking questions as they went along, about who they are and what the world means to them. But I didn’t. It totally fell flat for me. I followed the story and that’s fine, but not once did my heart turn on. Not once did I feel the call to something greater than myself, and not once did I feel like I actually got to see Cory Doctorow or Charles Stross’ hearts.


And that makes me sad. 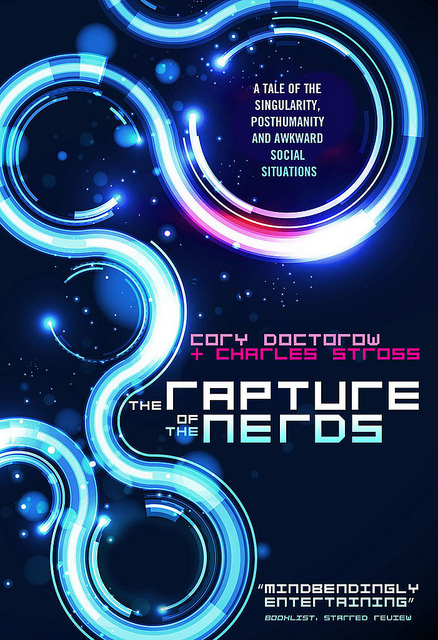