I Can't Believe You're Gone (The IT Crowd Finale) 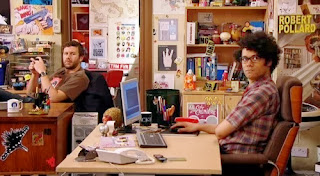 Okay, heightened drama aside, I am genuinely quite sad that The IT Crowd is over. Its final episode aired about a week ago, and while that episode did do a great job of tying up loose plotlines, giving us some satisfactory closure, and telling us where on earth Richmond got off to, it didn’t fill the gaping void in our hearts.

Sorry. The dramatic thing is really hard to stop once I get going.

Granted, it’s not all that surprising or even particularly sad that the show is ending. It had a good run (a full 25 episodes total, I believe), and all of the actors have gone on to bigger and better things. Graham Linehan, the writer/director/creator, is completely deserving of some time off now, especially when you bear in mind that he actually wrote every single episode of the show. 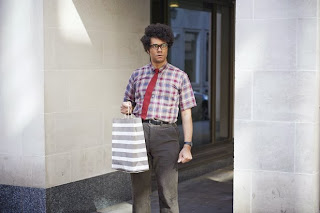 Which does explain why they’re so good, and also why he’s ready to be done with it. And I, for one, am thrilled to see a show go out at its peak, without a lot of life left unlived, but also without turning into a horrifying shambling zombie of a show (like, say, Law and Order), recycling plots and slowly driving its actors into numb misery.

It’s good that we avoided that. Yes. It is very, very good. But I can still be sad that the show is gone, can’t I? Because it was a very, very good show.

So, SPOILERS ahead for all of The IT Crowd, and be prepared to mourn with me. Or just read a recap of what happened and why it was a fitting ending. Whatever.

The final episode starts with all of the character seemingly in their usual places. Roy (Chris O’Dowd) has a new girlfriend, who actually seems to be something of a nerd, much to Moss’ delight. Moss (Richard Ayoade) has a new web-show about board games that is genuinely horrifyingly bad, and Jen (Katherine Parkinson) has a romantic flirtation with a ridiculously competent Italian barista.

In the true spirit of the show, it all goes to crap. The crap takes a couple of different storylines, of course, because this is The IT Crowd and stories be complex, yo. First, Roy learns that his girlfriend thinks he is “emotionally autistic”, as in, completely tone-deaf to emotional cues. Which is completely true. Roy then decides that he must prove to her that he can be sensitive and feeling if he wants to keep her, which is also true. Unfortunately, he manages to make things only so much worse. 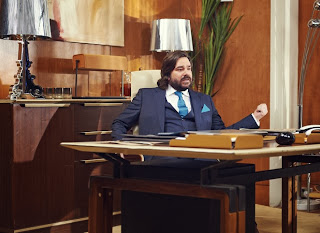 Moss asks Jen for help in making his show better, and she tells him that they all need more confidence. Moss’ search for confidence leads him to Douglas (Matt Berry), the company’s utterly incompetent CEO, who recommends that Moss start wearing women’s trousers. Because apparently that helps.

Roy tries Jen’s coffee place to cheer himself up, but ends up with a terrible coffee made by a very short barista. By which I mean that Roy’s barista is a little person, and he discovers that he is in fact a little person racist.

All of which spirals into Jen accidentally throwing hot coffee over a homeless woman, Roy verbally abusing a little person who then gets hit by a van, and the whole thing going viral online.

Desperate to salvage their lives, Roy and Jen turn to Moss and his ladies pants to fix it. Moss helps them come up with a new product that will show that they don’t hate women and/or little people, a special form of teargas in a pretty bottle. Only they forget to tell anyone it’s teargas.

So that doesn’t work.

Behind all of this, Douglas is forced to go on Secret Millionaire to get some good PR back for the firm, and ends up on the run from the cops after stealing a car and giving alcohol to a minor (both some of the least offensive things he’s done on the show, actually). He has to go into hiding, and the IT department generously offers him their offices, on the condition that they get his. And also to run the company. 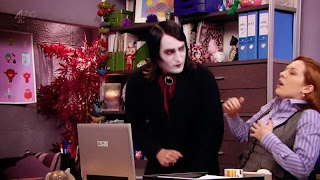 Yup, the show actually ends with Jen, Moss, and Roy in power as the leaders of an innovative new firm, Roy back with his girlfriend, and all of them happy and successful. Oh, and we find out that Richmond has been touring with his goth-rock band, but they aren’t very popular.

All of it is, as usual, quite silly, but that’s a good thing. If the show had somehow contrived to show us a world where the team doesn’t get spat on, where their lives aren’t miserable, we would laugh. But showing us a world where they get into the worst scrape they have yet, and then showing them slowly climbing back out only to end up on top, that we can believe.

Because at the heart of the show, these people are losers. And everyone wants to see, just once, the loser get to win.

If they won all the time, we wouldn’t root for them. If Roy were lucky in love, or Moss weren’t so freaking weird, or Jen actually managed to get a successful business idea off the ground, then it wouldn’t be so incredibly cathartic and joyful when, at the last second, our losers become winners. Their lives have to suck for a long time to make that part make sense. 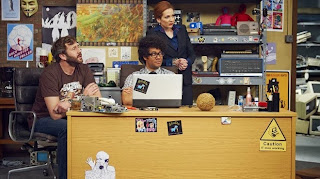 As a side note, one of the things I’ve loved about this show through the years was the way that none of the characters were one-note. All of them had romantic interests and romantic troubles. Jen, as the only woman in the office, was established as being the most relationally capable, but also as the only one with business sense and the only one with ambition. Moss is a technical genius, but he also has a thing for older women, is obsessed with Countdown, and is really intensely weird. And Roy, for all of his romantic foibles, has deeper things to deal with too. Like his self-esteem, his frustration with his job, and his intense misanthropy.

What I’m saying is that it’s a good show, and the ending, just as much as any other episode, shows that. Shows like The IT Crowd are rare. Shows like The IT Crowd that manage to keep their kooky weirdness and bizarre flavor are basically as common as moon rocks, and shows that manage to do it without becoming cynical are…well you get the picture. It’s not just that it’s a good show. It’s that it’s an interesting show, that it’s well written and compelling, and that it’s got female characters, characters of color, and they’re all equally funny and non-stereotypical. It’s that nothing is sacred to this show, but it’s never mean.


It’s that The IT Crowd is an amazing show, and while I hate to see it go, I love to watch it leave. 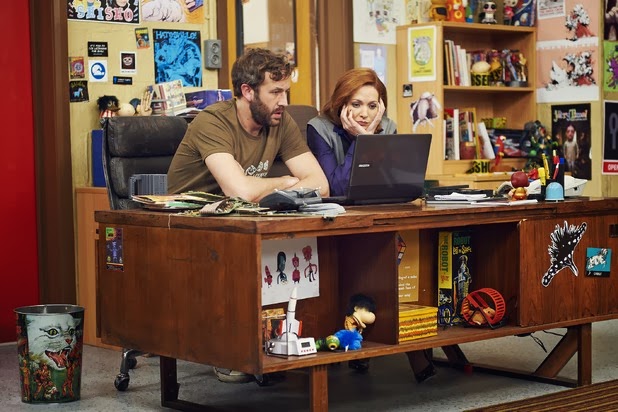