Continuing in our grand tradition of theme weeks for Linksgiving, this week we're talking about rape and rape culture. Yeah. It's not a funny topic, or a fun one, but it is important. Very important. So, without any adieu at all really, here are the links.

And, in case it seems like this list is a little broad, bear in mind that rape culture doesn't just mean straight up sexual assault, it refers to the mindset of society that makes such assaults possible. Everything from "Nice Guys" to the normalization of domestic violence to street harassment. It's all part of the problem.

1. "What Happened on 'The Mindy Project' This Week Was Not Okay" from Bitch Magazine. Why the episode that had a strongly implied male rape in it was pretty genuinely horrifying, and why we should all be more upset.

2. "A Needed Revolution: Rape and US Justice" from Newsweek. The arrest rate for rape (24% of reported cases) has not changed in thirty years. Let's talk about why.

3. "Let Me Spell It Out for You: I Don't Care" from STOP!Talking. A rage against street harassment and the people who try to explain it away as "compliments".

5. "Can We Just Chat About the Word 'Friendzone' for a Moment?" from lywinis on tumblr. It's good.

6. "Schroedinger's Rapist: Or A Guy's Guide to Approaching Strange Women Without Being Maced" from KateHarding.net. A classic.

7. "A Thin Line on Skirts" from the Wall Street Journal. After a series of sexual assaults in South Slope, the NYPD tried to encourage women to wear more modest attire. Why that was a terrible idea and also really offensive.

8. "Dear Young Ladies Who Love Chris Brown So Much They Would Let Him Beat Them" from the Rumpus. Er, I don't have to explain this, right?

9. "I'm Not Okay with Chris Brown Performing at the Grammys and I'm Not Sure Why You Are" from HelloGiggles. Also straightforward.

10. "A Field Guide to Nice Guys" from Jezebel. Because kindness is not a currency you use to buy sex or intimacy.

11. "5 Ways Modern Men Are Trained to Hate Women" from Cracked. You want to talk about rape culture? Let's talk about how our culture socializes men. This, for the record, is one of my absolute favorite articles. Ever.

12. "Why Do Men Keep Putting Me in the Girlfriend Zone?" from Upworthy. The flip side of the friendzoning question.

13. "So You're Tired of Hearing About Rape Culture?" from Rant Against the Random. Because it matters.

I couldn't find a video this week that was remotely pleasant to watch, so, instead, here's a picture of some kittens. We'll be back next week to talk about Women on Television. 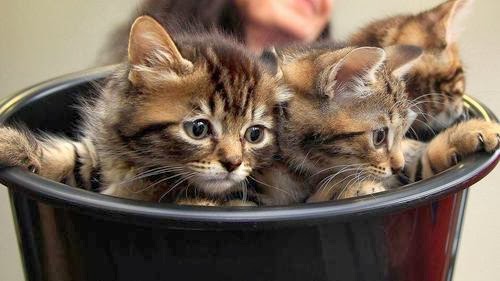