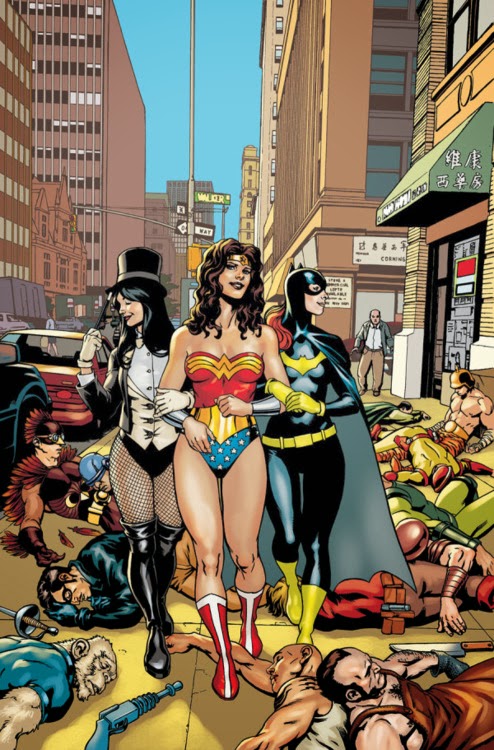 Welcome back to Linksgiving theme weeks, home of the way-too-many-links-about-one-topic special! This week we're talking about Superheroes and Gender, and all the associated sub-topics, while in past weeks we've covered "Strong Female Characters", Body Image, and "Fake" Geek Girls.

As usual, please bear in mind that these links are in no particular order, and since they consist of the whole wealth of things I've found online in the past year or so, some of them are a bit dated. If you have any additions, feel free to leave them in comments.

1. "What Batman Would Look Like Fighting in Stilettos" from The MarySue. It's exactly what it sounds like, and that is awesome.

2. "Dear DC Comics" by Michele Lee. An amazing letter to the company from a mom explaining why her seven year old is sad about Starfire.

3. "Lois Lane: Girl Reporter" by Dean Trippe. What it would look like if Lois Lane merged with Nancy Drew, and it was a graphic novel. Which it almost was.

4. "DC Is as Crazy as Catwoman Is Misshapen and Twisted" from Topless Robot. Remember the Catwoman cover that started it all? Well, if you don't, this will remind you.

5. "Inspirational Humans of the Day: Aurora Shooting Victims Attend Court Hearings in Batman-Shirted Solidarity" from The MarySue. Not about gender, but still amazing.

6. "DC Versus Marvel Versus Hollywood" from ComicBookMovie.com. A pretty good breakdown of why Marvel is stomping on DC at the box office.

7. "Wonder Woman Fan Film Shows Us What the TV Show Could Have Been" from Gamma Squad. I know, a totally different Wonder Woman fan film that is still way better than anything official.

8. Has DC Comics Done Something Stupid Today. It's a counter. And it's accurate.

10. "It's a Christmas Miracle! DC Comics Rehires Gail Simone for Batgirl" from The MarySue. In case you forgot that they fired her first.

11. "I Am Kelly Sue DeConnick, AMA" from Reddit. Female comic book writer talks about why it's so hard to get female characters approved.

12. "While Marvel Gets Super Cosmic in 'Thor' Sequel, Kat Dennings Brings It Back to Earth" from Press-Telegram. Because everyone could use a little more Kat Dennings.

16. "10 More Non-Costumed, Non-Powered Female Heroines" from The MarySue. It's important to remember that you don't need a mask or the ability to shoot lightning to be a hero.

17. "10 Completely Terrible Ways to Do a Justice League Movie" from io9. Heh.

That's it for this week! Theme Weeks will return next Saturday to talk about Rape (I know. Fun.). Have a lovely weekend.