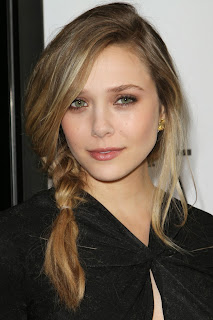 Samuel L. Jackson has just revealed (because Sammy L. is completely unfazed by NDAs, one would assume) that Elizabeth Olsen will be picking up the barely-there costume to play Scarlet Witch in Avengers 2. This is good news, not just because Olsen is a really good actress, but also because Scarlet Witch will be in Avengers 2. Yay!

Oh, and apparently Aaron Taylor-Johnson is a probability for Quicksilver. Should be pretty cool.

All things considered, I think this is a nice end to the day. Now we'll just have to cross our fingers and pray that her costume gets a couple extra yards of fabric added to it, and that her portrayal is more early-Ultimates and less late-Ultimates, and we're good to go!

Wait, does this mean we're going to talk about her kids from Young Avengers at some point?
Posted by Unknown at 5:39 PM