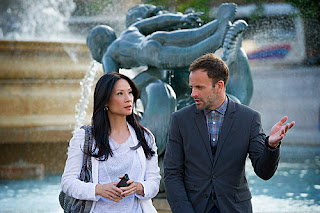 Elementary, I love thee. How do I count the ways?

As a side note, it’s October now and I’ve been really missing New England and all the fall gorgeousness, as well as the joy of snarking at leaf-peepers and the fun of finally getting to wear all my sweaters. I miss home. And watching Elementary tromp around New York, while not exactly the same as home (Boston, ftw!), is still enough to make me nostalgic.

So, with no further unnecessary bits, let’s talk about the Elementary season two premiere. Partly because I just finished rewatching all of season one, and partly because it’s fall and that’s what we do in fall. I might be a bit punchy right now. It’s been a bit of a week.

And it’s only Tuesday.

Anyway. For those of you who don’t know, Elementary is yet another modern update of the Sherlock Holmes stories by Arthur Conan Doyle, who must be genuinely upset about how much attention his least favorite character still garners. As opposed to BBC’s Sherlock, however, Elementary is perfectly happy to mess with the source material, as evidenced by the basic changes they’ve made to the structure. It’s a one-hour procedural with serialized elements that airs on CBS, it takes place in New York, and oh yeah, Watson is a woman. Also Asian-American. Because of reasons. 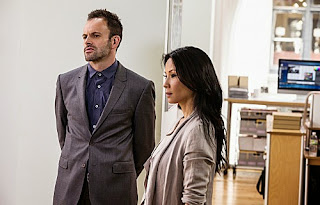 These basic changes do quite a lot to change the show around, and do strongly manage to rise above being gimmicks. Sherlock’s reasons for being in New York make quite a lot of sense (left London in disgrace when his drug problem got bad enough, ended up in New York before bottoming out and going to rehab), as does his relationship with Dr. Joan Watson (she’s his sober companion turned detective partner). All in all, it’s a fantastic adaptation and well worth looking into.

Oh, and Elementary’s Moriarty is my favorite thing in the history of ever. For the record.

So. Elementary is back, and roughly in the same shape in which we left it. Joan (Lucy Liu) is still consulting with Sherlock (Johnny Lee Miller), and though we didn’t get to see a lot of their status quo in the premiere episode, it seems reasonable to believe that their relationship continues much the same. Joan drags Sherlock to AA meetings, Sherlock ditches them to go solve cases, Watson is irritatingly perceptive, Holmes is prickly but lovable. Rinse, repeat.

This episode, however, dragged us out of our comfort zone and swiftly off to London, where Sherlock’s old associate, DI Lestrade (Sean Pertwee – son of the Third Doctor), has gotten himself into “a spot of trouble”. By which we mean that Lestrade accused a rich man of murdering his wife, then found himself driven off the force by the rich man and his army of lawyers. Now on the lam and still convinced he’s right, an alcoholic, abusive, angry Lestrade demands that Sherlock help him. Meanwhile, New Scotland Yard just wants Sherlock to find Lestrade so that they can keep an eye on him. 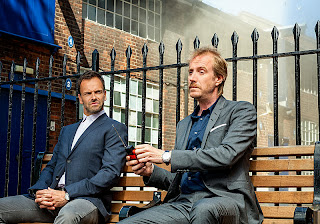 Complicating matters, as soon as Joan and Sherlock land in London they try to go to Sherlock’s London home, 221B Baker Street, only to find that it has been invaded and remodeled. Expecting to find one of his underworld contacts maintaining the place, Sherlock is shocked and displeased to find that Mycroft (Rhys Ifans), his loathed older brother, has moved in.

Mycroft and Joan hit it off in a mutually “tell me everything you know about Sherlock please” kind of way, while Sherlock goes off to solve a murder. Which he does. Turns out the husband did do it, with a plastic gun created by a 3-D printer and an associate. The associate turns up dead, but Sherlock and Joan manage to prove that the husband really was the killer, and all turns out well in the end.

Except for the part where a vindicated Lestrade now takes credit for Sherlock’s work on national television, therefore giving in to his own addiction to fame and the limelight and setting himself up for another fall. And Mycroft and Sherlock manage to have a moment of reconciliation, facilitated by explosives. Nice to see the boys getting along so well.

Obviously, in an episode like this, the actual murder is the least important bit. That was well written and pretty standard fare, so no complaints here. By and large the show is very good about their mysteries. Oh, they’re not epic masterworks of deception and cunning, but they are interesting, and serve as fantastic venues for the character development, the real meat of the show, to take center stage.

So. Let’s talk about the characters then. 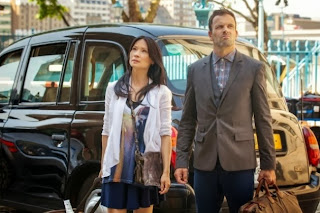 While there’s a part of me that appreciates Elementary giving us a glimpse of Sherlock in his native London after so long in New York, there’s another bit that was a little annoyed by this episode. It just felt rather unnecessary. Sure, the plot was cool and the idea of Sherlock finding himself the one saddled with an addict friend was a nice twist, especially as Sherlock starts to try to make amends for his past actions. But it still felt a little stale.

I mean, Joan loves the scenery. They complain about jetlag. Sherlock comments on the surveillance state in Britain. There’s a flat at 221B Baker Street and some time spent at New Scotland Yard. It’s so very…Sherlock Holmes.

I know that’s a weird complaint coming at a show that is an adaptation of the Sherlock Holmes stories, but I think it fits. A large part of Elementary’s success derives from its comfort deviating from the Sherlock Holmes narrative. In the original books, not only was Watson more of a fanboy than an assistant, and Sherlock kind of a pompous blowhard, the detectives were all incompetent, the discoveries were all about Sherlock, and the mysteries were all ridiculously obtuse.

That Elementary has chosen to shift the focus onto Watson as the lynchpin of the series, as well as depict Sherlock Holmes as more of a socially awkward man with tendencies to inappropriate behavior than a savant conducting an orchestra of dunces is much to the show’s credit. 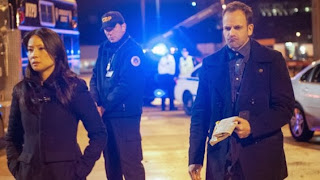 I like that Elementary is set in New York. I like that Joan Watson is first a woman and second not white. I like that he consults for the NYPD. And I love that everyone is always calling Sherlock on his crap. All of that is wonderful. I don’t actually need to see London and the familiar trappings of the story to be engaged. I’m good.

That having been said, however, Rhys Ifans makes a great Mycroft, and it was a fun episode. I don’t think the show is in trouble, exactly, but it’s more that I want to make sure they don’t forget why we love it in the first place. I don’t need another Sherlock Holmes who lives in London and is emotionally unavailable. I want my Sherlock to chill out in New York, raise bees on his roof, and give money to the homeless. I like my Sherlock. Please don’t mess with a winning formula. 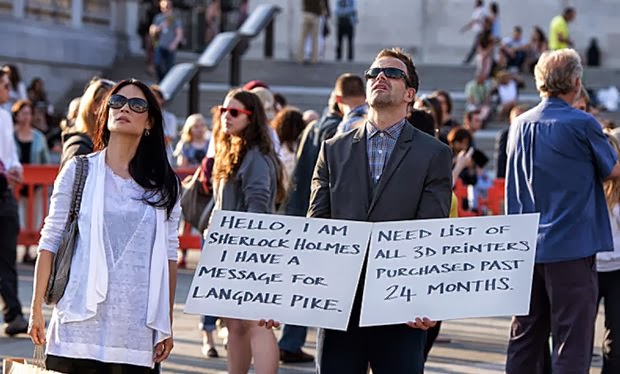