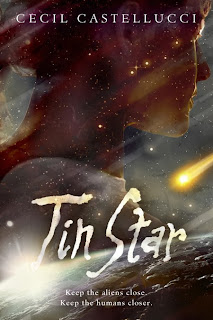 As an internet person of below-average influence and ambition, it's not actually all that often that I get to read an ARC (advanced reader copy) of someone's book. And it's even less often that it's a book I end up actually really liking. So imagine my glee when not only did I manage to score a signed ARC of Tin Star, the upcoming YA science fiction novel from Cecil Castellucci. Because this book? It's good.

Why is it good? Well, let's look at the evidence.

Tin Star is about a young human girl, Tula Bane, who travels to the stars as a colonist with a group of religious extremists called Children of Earth. Tula is being groomed for leadership when she asks a few too many questions and finds herself beaten and left for dead on the nearly abandoned space station Yertina Feray. With her fellow colonists, and her family, gone, Tula has no choice but to depend on the alien residents of the Yertina Feray. Aliens that, she has been told, really hate humans.

And it turns out she was told correctly. The aliens do hate humans, but that doesn't mean they're willing to let one die if they can do something about it. Tournour, a "Loor" and the constable for this station, decides to spare Tula, and, after she's woken up from her near death experience, even goes so far as to give her a rare present: a flower, which in space, is as good as gold.

But Tula is still stuck on the Feray. Worse, she receives news that her ship, which still carried her mother and sister, has exploded before reaching its destination. Her family is dead, the Earth considers her a traitor, and the man who tried to kill her, Brother Blue, is still at large. Also she has no money, no friends, and no marketable skills. Tula has kind of a problem.

From there, the novel mostly follows Tula as she learns to not only survive, but thrive on the Yertina Feray. She makes friends with Heckleck, a trader of various goods, illegal and not, and learns to make deals, schmooze everyone, and always keep her side of the bargain private. Tula wants off the station so that she can find Brother Blue and kill him, but somehow events keep conspiring to keep her there. First there's the fact that she has no money. Then there's a mild revolution in the galaxy's government, and it's a bit too dangerous for her to travel. And then she finds that she's not the only one looking for Brother Blue.

I don't want to get too much into the details of the novel, because much of the story consists of a slowly unraveling mystery, with a lot of tension and some classic thriller elements. It's sparsely written, but still emotionally convicting. The moment that Tula first sees other humans after four years alone among the aliens is somewhat heartbreaking in its honesty. After all these years, Tula no longer really thinks of herself as human, and she doesn't remember how to relate to them, nor they to her.

There's romance, of course, because this is a young adult book. But the romance never overwhelms the plot, which is much more about survival and intrigue, nor does it feel ancillary and pointless. It's just there to spice things up, and fits very well into the overall storyline. Also, and I want to figure out how to say this without giving anything away, there's a romantic twist towards the end that literally made me squeal with glee. Out loud. In a restaurant. So, you know, there's that.

Mostly, though, the book is about Tula and her constant search for herself. I mean, most books are about identity, but this one, where Tula is caught as the only human she knows and also the only survivor of her family, is especially poignant. We stay with her for a long time, too. About five years, I think, during which time Tula grows and matures and changes. She learns some pretty terrifying truths about the universe, and she figures out who she wants to be. I can't say much more than that without spoiling something, so we're going to leave it there.

Now, this book doesn't actually come out until February, which is a darn shame, because you should all go read it now. But, since you can't, you can just pre-order it here on Amazon.

[Also, for the record, I'm not getting a kickback from this or anything. I mean, me? Make money? You're adorable. I did get a free signed copy of the book, though, so I am a bit biased. Like, 12% biased.]

Mostly, I want you all to go out and buy this book so that then you will read it and it will make you happy. Oh, you may not all like it, but most of you will. Of that I have no doubt. Why am I so sure? Because I know people. Literally. It's my actual job. I know that in our hearts we're all pretty much asking the same questions: who am I and what am I doing here? This is a book that not only asks those questions too, it asks them in a fully realized world with space stations and aliens and the underbelly of an alien society and a black market and illegal street fights and abandoned mining robots and so much cool stuff your head will spin.

And, honestly, Tula Bane is pretty much exactly the kind of heroine I love best. She's smart and strong, without it feeling like she's putting up a front. She's clever, but not educated. Street smart. She's physically gifted, but no more than is reasonable given her circumstances. She's emotionally distant, but you would be too. She's determined to get revenge, but she still remembers that it might not make her happy. She isn't sure she cares.

Those things, those little things, they're what make you love Tula and what make you want her to turn out right in the end. And, not to spoil anything, but she does. Sort of. In a way you don't expect. In a way that makes you really really excited for the sequel to come out already.

So, yeah. That's your allotted fangirling over a book that you won't get to read for another four months. I'd say I feel sorry for getting you all worked up like this, but let's be real. I don't. I just want you to go out there and buy the damn book so that you can understand what I'm talking about and appreciate it with me. 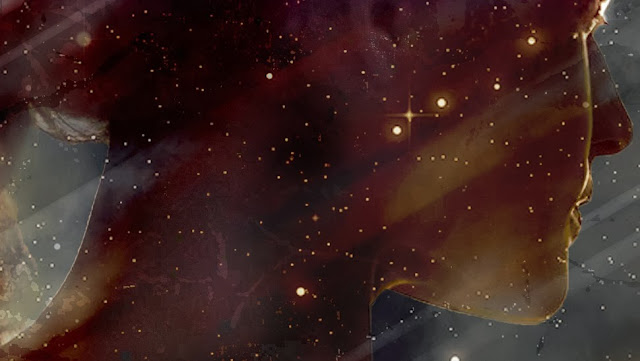