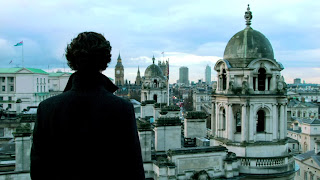 So, I've been a bit down on Mr. Steven Moffat lately (see examples one and two), because he appears to be in the process of conducting an extended poo all over one of my favorite shows, a show that I, as a matter of fact, wrote my college thesis on and to which I am a little bit attached.

Imagine my surprise then when I watched the most recent episode of Sherlock, "The Empty Hearse", and liked it. Not just tolerated, but genuinely liked. I was watching it in a restaurant, as is my wont (or just because it's the holidays and I'm out of food/don't want to eat more toast), and I found myself giggling uncontrollably, fidgeting, and grinning like a madwoman while the waitress kept stopping by to ask if I was really okay. Don't worry. I tipped her well.

Anyway, much as it really does shock me to say, Sherlock is back and it's great and it actually addresses some of the things I've always wanted the show to address, and I would even go so far as to say that it's better than series two so far. It's really just honestly very good and I liked it.

Are you all dead from shock yet? I know I am.

Now, part of this can be explained away rather easily. This episode, "The Empty Hearse" was actually written by Sherlock's co-creator, Mark Gatiss (who also stars as Mycroft, and does an excellent job at both). Gatiss is usually quite good at writing stories with some heart to them, so I'm not that surprised at how much I liked this episode. But still, this is a series where Moffat is still the showrunner, and it's several seasons in, so the marvelous cleverness has worn off a bit, and I'm mostly just gasping that I still, genuinely, like it. 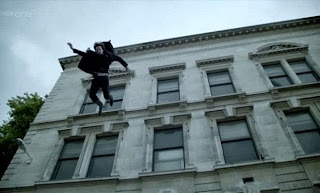 But all of this is very up in the air and sweet and nice, but not actually practical. Let's talk details. What about this did I like so very much?

SPOILERS from here on. Like you haven't already been spoiled by the internet, let's be real.

Unsurprisingly, this episode picks up a bit after the last one left off. While "The Reichenbach Fall" ended with Sherlock jumping off of the roof of St. Barts Hospital in order to save John from being taken out by one of Moriarty's snipers, and then revealed that while John and Mrs. Hudson mourned his death, and the rest of London thought he was a fraud, Sherlock was actually alive, and bound for locales unknown.

Cut to two years later, and John (Martin Freeman) has shakingly moved on. He's fallen in love (with a woman, thank you very much, Mrs. Hudson), and is even getting ready to propose. Of course he misses Sherlock and the excitement of working with him, but he's fine. He's alive. He survived. Good for him.

Or is it? Because John's a bit bored now, and even Mary (Amanda Abbington, Freeman's real life wife) can tell. Also, Lestrade (Rupert Graves, the silver fox) deals with a guilt-ridden, conspiracy-addled Anderson (Jonathan Aris and his beard), who believes that Sherlock is still alive. Which he is, not that Anderson actually knows that.

But the tide is turning. With Moriarty's network almost entirely dissolved, and a looming terrorism threat in London, Mycroft pulls Sherlock (Benedict Cumberbatch) home to London again. And Sherlock is happy to come. Less happy, though, once he realizes that now he's going to have to deal with people and their messy feelings. 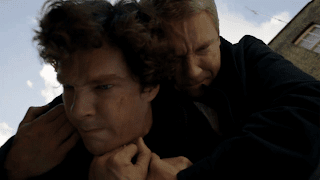 Upon discovering that Sherlock is not, in fact, dead, everyone reacts in the following ways: John punches him, a lot, while Lestrade just hugs him. Mrs. Hudson (Una Stubbs) screams like a banshee, and Anderson weeps awkward tears. And the public just thinks it's grand. As does Mary, who immediately likes Sherlock, in a rather surprising turn of events.

The actual plot of the episode is kind of meh. I don't remember a whole lot of it, to be honest. Mostly, though, it's got Sherlock trying to track down the terrorism threat while convincing everyone that he really isn't dead and that he pretended to be dead in order to save them all. John, of course, takes the most convincing. And it isn't until he is sure they're about to die that he finally forgives his friend.

So here's what I liked about this: I don't really remember the case, John was pissed at Sherlock, and Sherlock apologized, at length, to everyone and everything.

We'll go through them in order, and that means we do the weirdest first. Yes, I actually quite like that I didn't get much of the case in here. Why? Because the cases aren't why we watch Sherlock, are they? I mean, I love a good clever detective story as much as the next girl, but there's only so much cleverness you can take in one sitting, isn't there? And besides, we didn't need a whole episode of Sherlock being the cold and calculating genius. We know he's a genius. We know he can solve this one with his eyes closed, which he sort of does. We even know that the stakes, whatever they may be, aren't really that high.

What we want, or at least what I wanted, was some resolution here. Because Sherlock faked his own death, and while that totally seemed like the best choice at the time, it was completely and totally a dick move to do to John, and I want that recognized, damn it.

The problem Sherlock has always had, for me, is that it can feel a bit cold. Sherlock himself isn't in touch with his emotions (though he's more probably on the Austistic Spectrum than a sociopath, because sociopathy isn't actually a thing). He acts in ways that flout societal norms, and while we can cheer for him in fiction, in real life, we'd all think he was a twat. Because he is a twat. 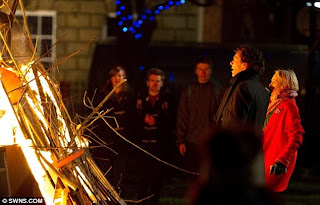 It's part of why I've actually come to like Elementary a lot more than this Sherlock. In Elementary, Sherlock is a twat, but he gets called on his crap with healthy regularity. That's good. I like that. More than that, though, he grows. He matures. He learns that his behavior is unacceptable and he seeks to alter it.

In the first two seasons of Sherlock, the titular character is mostly a fixed point. Things happen to him or around him, but not with him. He doesn't change. He doesn't develop. Past the point where he decides that he and John are friends, we never really get to see any character development. Sherlock just is.

Which is total crap, isn't it? That's not how people work. People are always changing and shifting and moving around. You think you've got a bead on someone and two weeks later they're virtually unrecognizable. That's normal.

So here, seeing Sherlock humbled, seeing him apologize, seeing him take his own actions into account and try to minimize the damage he does to others' lives, it's wonderful. It's refreshing. It's good.

There's a scene around the middle of the episode where Sherlock challenges Mycroft to a deduction-off. It seems like a silly clever little moment, but it quickly turns a lot deeper. Sherlock is worried for Mycroft, you see. Mycroft has always been a loner, like Sherlock, but Sherlock isn't alone anymore. He has friends, family even. He has people. But Mycroft is still alone. And this worries Sherlock. He knows that it is not good to be alone. And that, my friends, is some massive character growth.

Oh, this development isn't wholly absent from the other two seasons, but it's not the focus either. Those seasons were about the mysteries and how clever Sherlock could be to solve them. This episode isn't. It's about Sherlock stumbling around in a city he's forgotten, trying to reconnect with his friends and figuring out who he is now that he's back. It's good. 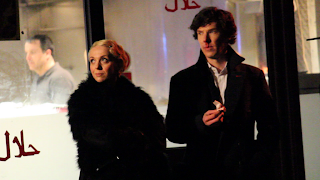 This doesn't mean he's stopped being Sherlock Holmes, for the record. He's still insanely clever, dryly witty, and a bit cruel when it comes to it. He still locks John in a (hypothetically, though not actually) exploding train car with him until John forgives him for being dead. He's still a prick. But he's a lot better about it now.

I've no idea if the next episode, which apparently takes place at Mary and John's wedding, will be any good, but at least we don't have too long to wait. Episode two will air on Sunday in Britain, and then all the episodes will air in the US later this month. I'll of course be watching on Sunday, and let you know the real scoop as soon as I can.

For me, the real lingering question is much less about Sherlock himself. I'm quite happy on that front, actually. Rather, I want to see if this is the season where the women of Sherlock, who are by and large lovely and interesting creatures, actually talk to each other or break away from having their lives defined by Sherlock and John. It's not that I don't love Molly (Louise Brealey), Mrs. Hudson, and Mary, it's that I'd love even more to see them no longer defined by their male relationships, but allowed something of their own in the story.

Also, Mary, Molly, and Mrs. Hudson solving crimes together would be the coolest thing on earth. Just saying.