Just Because 'Jupiter Ascending' Is Bad Doesn't Mean It's Not Fun 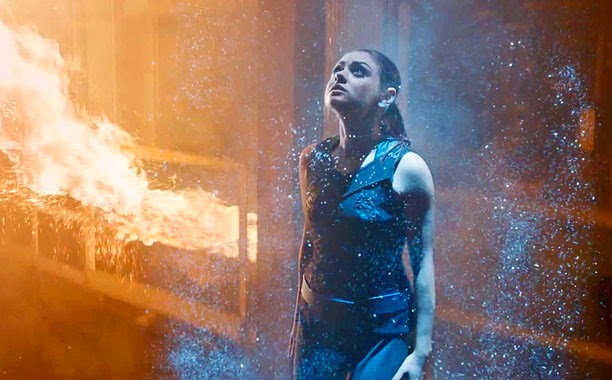 I want to get one thing clear before we get going. I do not, under any circumstances, think that Jupiter Ascending is a good movie. Like, no way. Not even a little bit. It's awful. This does not, however, mean that I think you shouldn't go see it. You should. It's awful and cheesy and dumb and you need to watch it right now because it's going to bring you so much joy.

Was that confusing? Well so is this movie.

The film, which is an original science fiction piece from the minds of Andy and Lana Wachowski, is very had to summarize, but I'll do my best. The story follows Jupiter Jones (Mila Kunis), an undocumented Russian immigrant who lives with her mother and cleans toilets for a living - the American dream! Her life is dull and miserable until one day she tries to sell her eggs for cash and nearly gets abducted by aliens. Fortunately, a different alien, Caine (Channing Tatum), rescues her and they go off on a cross-country road trip of exposition. 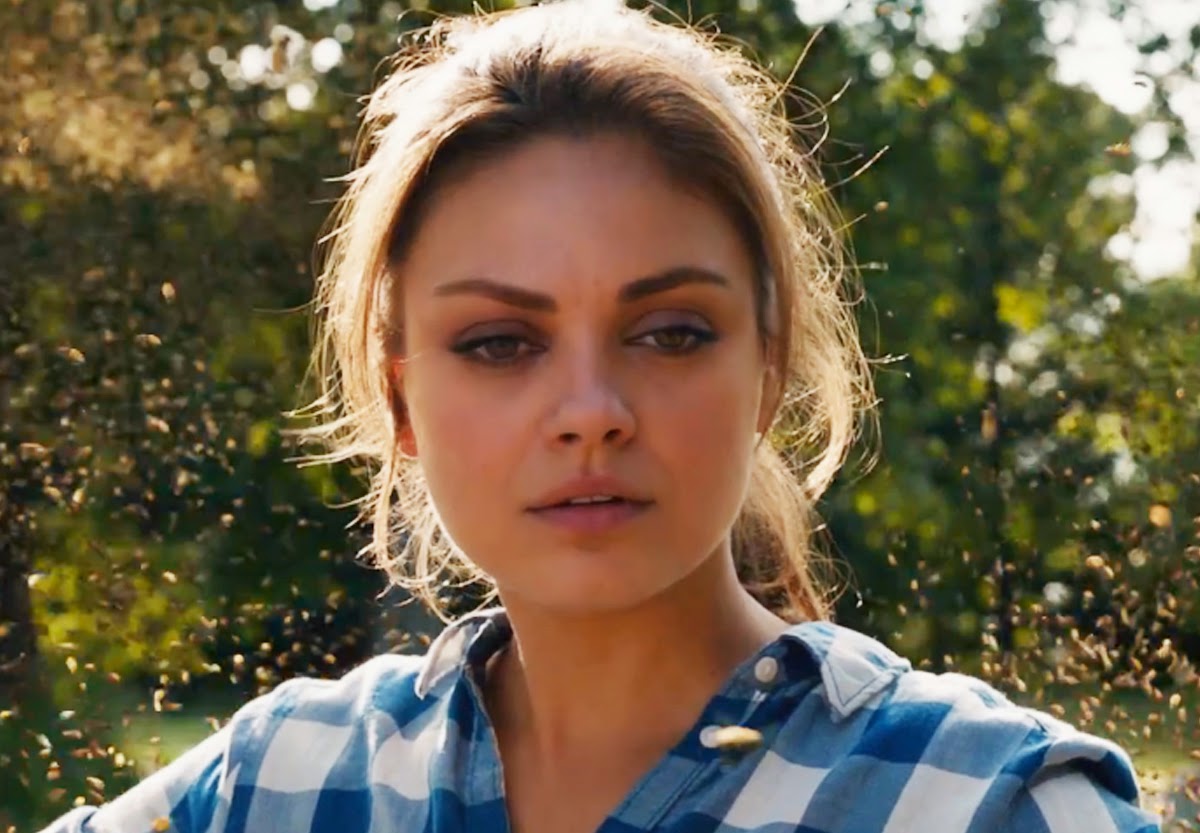 It turns out that aliens are after Jupiter because she is the genetic reincarnation of the deceased matriarch of a very important space family. Said family is one of industrial, capitalist space vampires who harvest DNA or genes or souls or something from planets and then bathe in them so as to stay alive forever. And they see no moral problem with that because they themselves planted life on those planets in the first place.

Earth, it seems, is one of those planets, and its owner, Balem (Eddie Redmayne at his scenery chewing-est), wants to harvest it right now. But before he can do that, he has to kill Jupiter, because as his mother's reincarnation, she is entitled to an inheritance. And that inheritance is Earth. Because of reasons. Shut up and don't try to introduce logic into this movie.

Balem's siblings, Kalique (Tuppence Middleton) and Titus (Douglas Booth) both make their play to get Jupiter, and therefore her inheritance, on their side, while Balem keeps trying to kill her and Caine generally moons around repressing his love for Jupiter while angrily challenging everyone to a fight. Jupiter herself is mostly a macguffin meant to keep the plot, such as it is, moving, and there are no less than two sequences wherein Caine must race to stop Jupiter from doing something stupid and arrives just in the knick of time.

In the end, and trust me this really isn't a spoiler because I promise none of this plot matters at all, Jupiter manages to survive her space adventure and returns home to her argumentative Russian family, having decided that her life really isn't so bad. Plus, now she has a hot space boyfriend and secretly owns the planet. Not bad.

Like I said, the plot is definitely not this movie's strong point. What it does have going for it is, first, that it's absolutely gorgeous to look at, and, second, that it is the most entertaining experience you can have in a cinema right now. No, it's not good or even comprehensible, but it is savagely fun. Why? Because this movie has no idea what it is, and that is not a bad thing. Here is a list of things that actually happen in this movie: 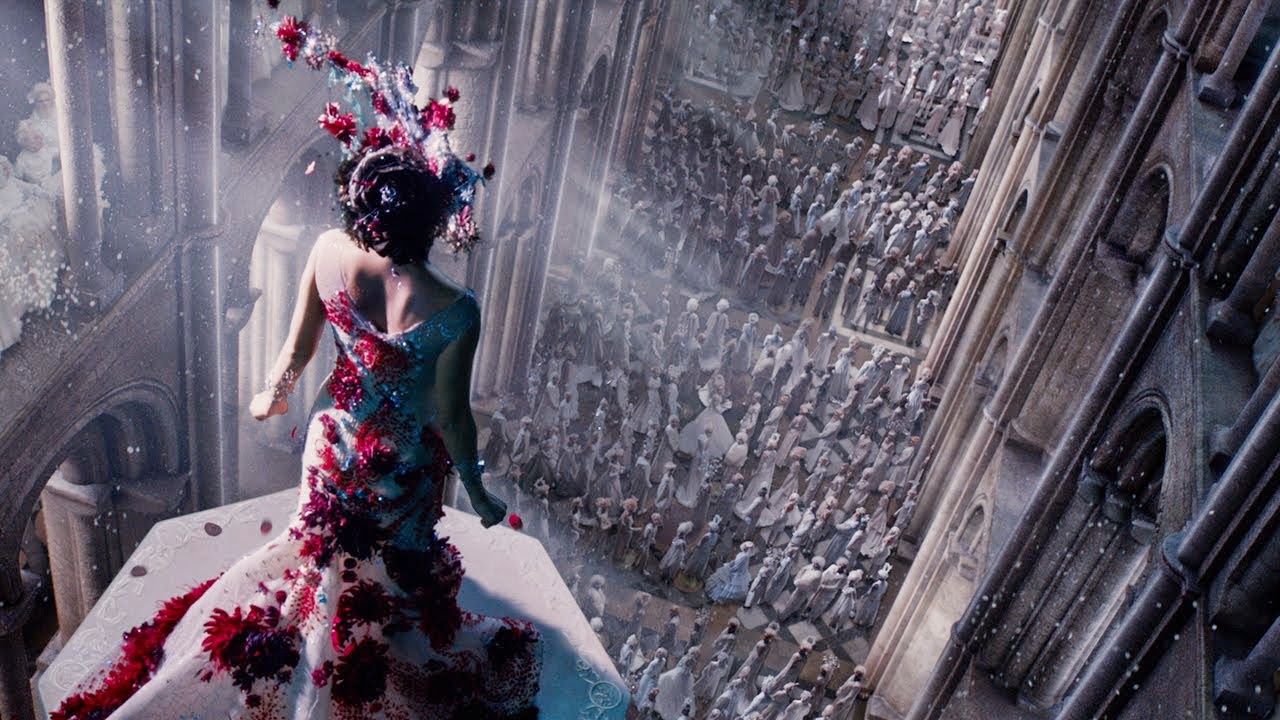 -There are space bees that have been trained to recognize royalty. For some reason.

-Titus tries to marry the reincarnation of his mother.

-A space werewolf fights a dragon in an exploding DNA refinery. In space.

-Sean Bean plays a soldier who is part bee (named Stinger). Stinger betrays our heroes because his daughter has space cough and he needs space medicine to save her.

-There is a ten minute sequence of Jupiter and Caine navigating the space DMV.

-Two androgynous bureaucracy robots get into a staring contest.

-Jupiter mops up Caine's injury by sticking a sanitary napkin to it.

-Caine's motivation in the film is to get back his bionic angel wings which were taken from him.

-Jupiter is kidnapped no less than five times. Possibly more. I lost track.

And so much more.

My point here isn't that Jupiter Ascending is a good film, because it very patently isn't. Rather that good and entertaining are not necessarily the same thing. I might still be confused on what the actual plot of that film was, but I had a hell of a time watching it.

And to some extent, it is worth mentioning that there are some themes, and by and large they're compelling ones. Jupiter starts the film as an openly materialistic and relatively shallow person. She's obsessed with getting her way to a new life, because she's deeply dissatisfied with the one she has. Which is fair, because her life sucks. But as she discovers that she's space royalty and heir to a great fortune, Jupiter matures and discovers that being rich comes with its own set of problems. At the end, she's genuinely grateful for what she has and realizes that her life is actually kind of awesome. 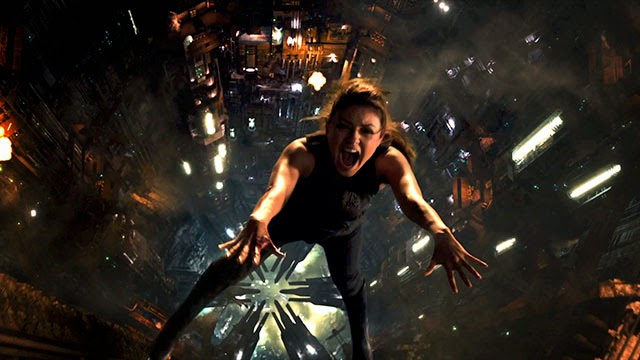 I mean, the end of this movie is that our heroine goes back to her job cleaning toilets and arguing in Russian with her extended family, but there's something satisfying about how subversive that is. The whole film is, after all, a critique of capitalism*, and it's very pointed to see that in the end, Jupiter gives up all the wealth and title to live humbly as a maid because she has determined this is the better life.

No, it's not particularly subtle, but it is a nice message. Wealth and fame really aren't all they're cracked up to be and you're probably much happier cherishing what you have. It's nice to see the movie not pull any punches with that message, or try to get past it in some way. It makes for a strange ending, but a satisfying one.

For that matter, while the whole plot feels contrived and incredibly convoluted, the romance between Jupiter and Caine is remarkably sweet. Dumb and badly written, but sweet. Caine insists that he and Jupiter can never be together because she's so much better than he is (because she's royalty), while Jupiter just absolutely insists that there is no issue here and Caine should kiss her right the hell now. She is not subtle about how much she wants him to get over the whole class differences thing, and it's great. Just because it's not well written doesn't mean it's not fun.

It's clear, at least to me, that no one really knew what to do with this movie, but that's not necessarily a bad thing. While this film could definitely use a good editor and clearly has about three different stories vying for dominance, it's also a really unique vision and the kind of imaginative, lush, creative science fiction we all keep saying we so desperately want.

Yes, Jupiter is a total damsel and frequently a macguffin, but we do see the film through her eyes and that's pretty cool. Sure, Caine does a lot more to advance the plot than she does, but we're still talking about a giant Hollywood film based around a woman. 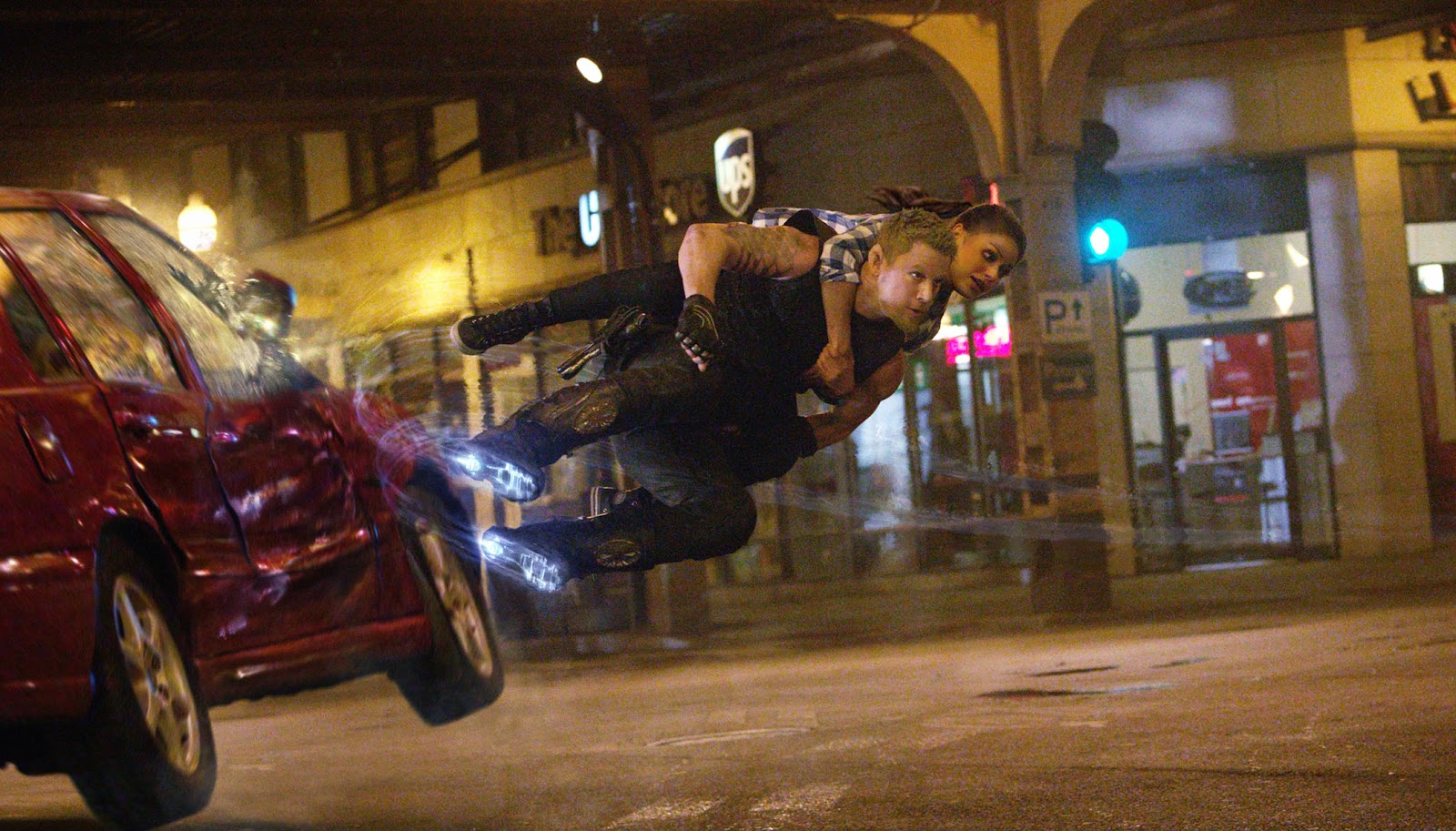 Also, it passes the Bechdel Test in the first ten minutes of the film and has really compelling female character sprinkled throughout the narrative. So while it's not taking Hollywood by storm or anything, this is a movie that cares about diversity at least a little (most of the main cast is white, but the supporting cast is solidly mixed) and has done some tiny things to change the status quo.

To a large extent the film works because the cast is so darn good. Mila Kunis totally sells it as Jupiter, clearly infusing her own actual experiences as a Russian immigrant into the role, because Jupiter is way more compelling and complex than she has any right to be. Kunis even goes so far as to make her character dry witted where the script might make her seem dumb, and overall saves her character from being just another blank face or "neutral mask". Channing Tatum isn't setting the world on fire with his portrayal of Caine, but he does a good job with some very silly material and reminds us all that he can be a good actor when he wants to be.

Even the minor characters, with the exception of Eddie Redmayne who was just having a really weird time in this movie, are great. Maria Doyle Kennedy and James D'Arcy are fantastic and tragic as Jupiter's doomed parents, and Vanessa Kirby is freaking hysterical as a rich woman whose house Jupiter cleans. Nikki Amuka-Bird does a great job humanizing her character as the space cop charged with protecting Jupiter, and Gugu Mbatha-Raw is equally good as the nefarious space assistant arranging Jupiter's demise.

And there's something so viscerally satisfying about this story, such as it is. Sure, it's basically a teenage girl's first novel made into a multi-million dollar movie for everyone to see, but that's not really a bad thing. Yes, Jupiter is a Mary Sue, as in a perfect character who is clearly a wish fulfillment fantasy for the audience, but then so is Batman. And yes, the character designs and whole thing where every alien is just a person with some animal traits spliced in is silly, but who cares? It's fun. Just because something is generally associated with teenage girls and/or is a wish fulfillment narrative doesn't mean it's bad or not worth watching. 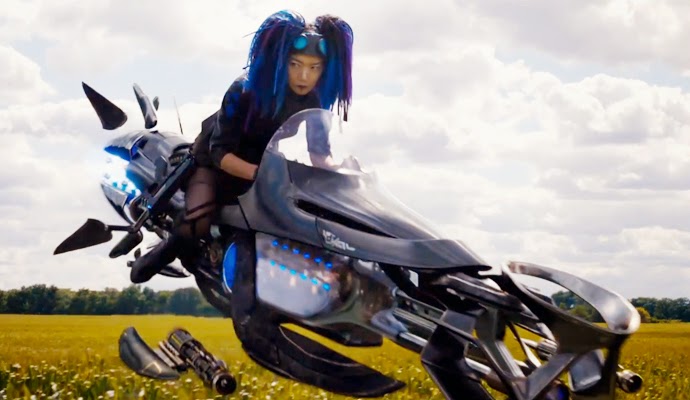 But all of this gets away from my larger point, which is that Jupiter Ascending is a gorgeous, delicious trainwreck of a film that you should absolutely go see.

It's not even because I think that you'd have fun laughing at it, like I did with the Twilight movies, or even that I think you'll enjoy hating it. Rather, I think that this movie is entertaining the way that abstract art is entertaining. There's a lot of pretty stuff to look at, many fun and/or funny things happen, and at the end your stomach will hurt from giggling and you will feel incredibly good about yourself and the world. No, you won't have any idea what just happened or how the heck this script got approved by a human being who could read, but that doesn't matter. You won't care. You'll still be smiling too hard to even notice.

And isn't that what movies are for, anyway?

*The Abrasax empire, as in, the industrial empire that Jupiter's past self made, is literally built on human death and destruction. They harvest the poor and sell them to the rich so that the rich can live forever while the poor die. It's not a particularly subtle metaphor.
Posted by Unknown at 9:00 AM