Kiss My Wonder Woman is a blog, started in 2011, primarily written by Deborah Pless. It is primarily focused on the representation of women and minorities in popular media. It's also a very active tumblr and a not particularly active facebook page.


Our mission is to talk about stories, because they're important. They're the way we process reality and remind ourselves of who we are. If we don't examine stories to look at what we're really saying about our lives, then we're walking blind through a world we can't even begin to comprehend. And no one's got time for that. But more than that, we need to talk about the way that the stories we tell represent us and how they represent our world, because the stories we tell define the reality that we experience.

And, of course, nerding out is just plain fun.

Now, it's important to note that this blog has been running for a few years now, and some of the views expressed in older entries might be inconsistent with the views now held and expressed by the writers. That's okay. That's not a fluke or bad editing. We at KMWW have made the conscious choice to leave old articles up to act as an archive of how our views have changed and developed over time. If you have any questions or concerns about an article in particular, we encourage you to email us at kissmywonderwoman@gmail.com. We would love to talk to you about it. 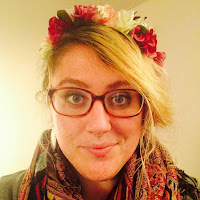 Deborah Pless is the founder and primary writer on KMWW. She works as a freelance editor and creative writing teacher, and has her BA in Philosophy and MFA in Screenwriting. She's contributed to Doctor Who and Philosophy and Futurama and Philosophy, Representing 9/11, Divergent and Philosophy, and More Doctor Who and Philosophy. Her work from this blog was also featured in Speculative Fiction 2014, a compilation of the best criticism and analysis of speculative fiction from that year. She likes cats (but not in a weird way), writing comics, and going to see far too many movies every week. You can follow her on twitter, or you can read more of her stuff on Bitch Flicks, where she is a semi-regular contributor.

She has also worked as an independent editor and writing guru, and one of her more recent projects is now available on Amazon! Check out Halo Found Hope, the incredible memoirs of Helo Matzelle and her struggle with and recovery from a catastrophic brain tumor.